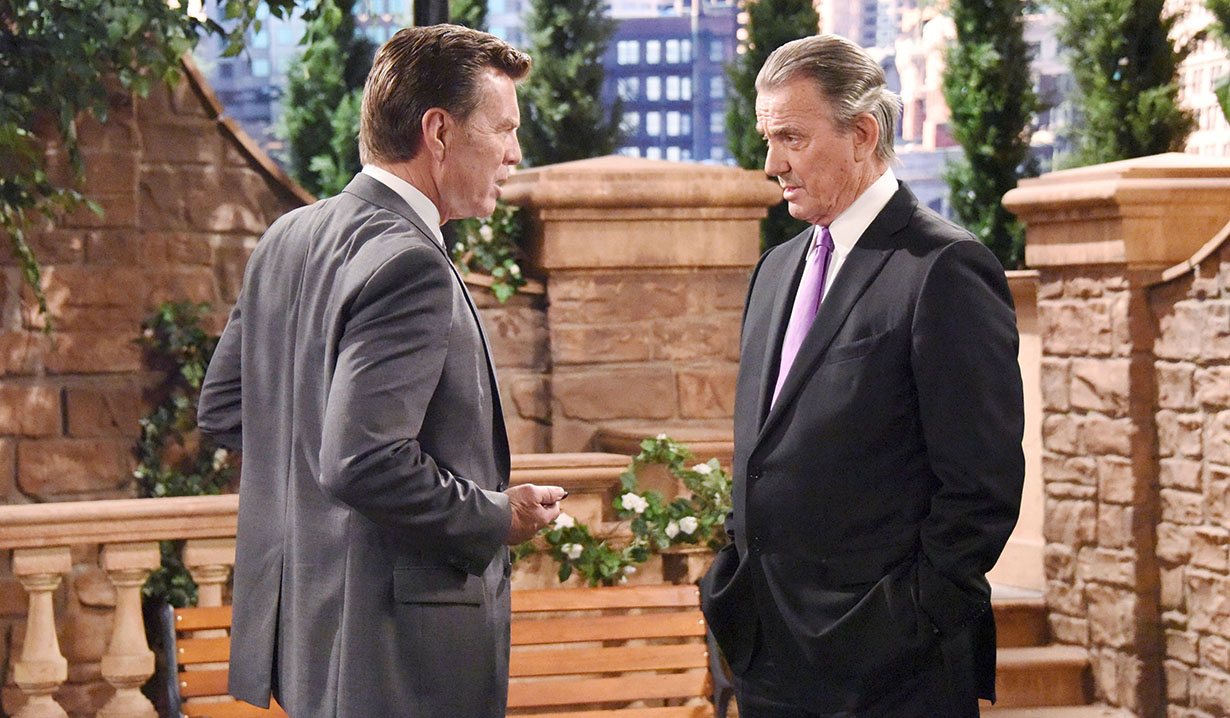 Sudden personality twists in long established characters or changes in established patterns of behavior is frustrating for viewers. When a character begins behaving in ways viewers don’t associate with their core personality, without reason, we remember Douglas Marland’s rules for how not to ruin a soap when he stated, “Don’t change a core character. You can certainly give them edges they didn’t have before, or give them a logical reason to change their behavior. But when the audience says, ‘He would never do that’, then you have failed.” Soaps.com examines four characters from the “Young and Restless” who just aren’t themselves lately. Jack Abbott:
Jack has always had a penance for revenge on all things Newman. Nobody incited Jack’s anger and need for payback quite like Victor Newman. But these days, Jack has gone from fired up, to dumbed down. We’d rather see him throw Victor’s chair through a window again than be the spineless Jack he is now. Viewers either cheered or jeered watching Jack devise one revenge scheme after another, but at least we knew to expect it.

After what has to be the most fiendish of Victor’s plots to destroy Jack – kidnapping him, allowing Kelly to torture him and replacing him with dangerous doppelganger Marco – Jack barely responded with a whimper. After John’s ghost urged a hesitant Jack to seek revenge on Victor, Jack agreed and viewers waited eagerly for what was certain to be an epic showdown. Maybe this time Jack would throw Victor himself out the window! Yet all the showdown surmounted to was some verbal sparring and Victor signing Jabot back over to Jack. Huh? That’s it?

Jack’s inability to walk away from his hatred of Victor is a core part of Jack’s character – but it is also a core part of the show’s history. Decades of “Young and the Restless” storylines have been built on the legendary rivalry and revenge matches between Jack and Victor. It is unfathomable that Jack is suddenly all about mending fences, encouraging peace, and forgoing revenge for ‘moving on’. Dear writers: did a second, more docile doppelgänger take Jack’s place recently? Phyllis Summers Newman Abbott:
Phyllis is fierce, decisive and bold. Even her schemes are concocted with flare and gusto. Remember when she held Michael in a warehouse just to make a point? (she was jealous of his other clients). Even emerging from her coma was a dramatic affair. Who else but Phyllis would hitchhike her way back to town, don a glam dress and burst in on Nick and Sharon’s wedding?!

While viewers understand her history with Jack, Phyllis has spent the majority of their relationship playing the uncharacteristic role of dutiful spouse. Her affair with Billy and their revenge schemes were much more Phyllis’ style. So viewers are mystified as to why Phyllis can’t let go of her role as Jack’s ‘Stepford wife’ –and Jack’s over the top, love speeches – and is agonizing over whether to choose Billy over Jack. Phyllis, impulsive and no-nonsense, is not a woman who waffles! Her schemes with Billy and their smoldering chemistry have reminded viewers of Phyllis’ former fiery glory. Dear writers: let’s have more of the real Phyllis! Victoria Newman:
Victoria has always been an integral player in Genoa City’s business world. Unlike many of her siblings who were handed their corporate jobs, Victoria worked her way up the corporate Newman ladder, beginning first in the mail room. Over the years Victoria managed several Newman subsidiaries and completed a few stints as Chief Executive Officer. When Victor inherited majority ownership of Chancellor Industries and plotted a merger between Chancellor and Newman, it was Victoria who managed the controversial merger.

So after years of being depicted as a clever business woman, suddenly Victoria can’t seem to multitask running Newman with a love affair with Travis. Worst, Victoria is now being shown up by her inexperienced and ill qualified niece, Summer. Why is business mogul Victoria allowing Summer and Luca to question her leadership? Speaking of Luca – we’re not quite sure why after dealing with the likes of devious Brad Carlton in business, why it took so long for Victoria to recognize that Luca was a shady business man. Dear writers: please give us our business heroine back! Hilary Curtis Hamilton:
Hilary hasn’t been herself lately. Viewers are speculating her illness will explain away her diabolical behavior, but it won’t entirely explain why we had to endure months of Hilary blackmailing, scheming, and plotting to take over the town with no apparent motive.

As viewers know, Hilary began as a schemer, but eventually proved to be sensitive and loyal. The woman putting the moves on Jack behind Devon’s back is the same woman who was once so caring, that she sacrificed the life she wanted with Devon to care for Neil when he went blind. Now, suddenly, she’s determined to take over Genoa City (for what reason again?), launched a rivalry with Ashley that jeopardized Ashley’s health, and recently appeared willing to ditch billionaire hubby Devon for older and less wealthy, Jack Abbott! Viewers have never had an understanding of why Hilary turned into a shrewd vixen or what she is really after. Dear writers: some backstory would help.

As discussed in the last personality twists piece, fans felt that Adam Newman went from soft spoken farm boy, to diabolical mastermind, to docile push over!

What do you think about the personality changes in “Young and the Restless” characters? Sound off in the comments below!

Jill demands answers from Phyllis in...

Dylan and Paul clash over who's in...