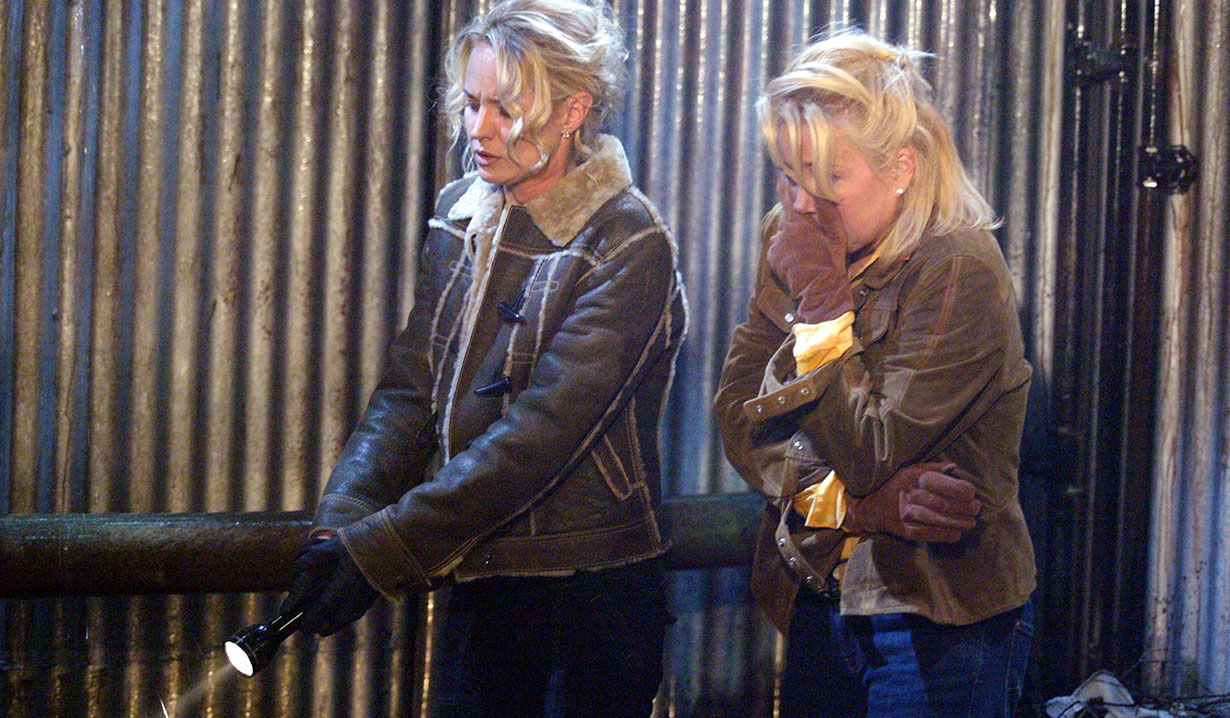 She stirs up a lot of  controversy!

All of the citizens of Genoa City have had cray cray moments. Fans have watched in horror, amazement, and entertainment. Arguably no character has bought more trips on the Crazy Train than Sharon Newman. After Sharon was caught stealing, and having blackout episodes she was diagnosed as bi-polar. Soaps.com takes a fond look back at some of her hottest messes.

Nikki and Sharon in the sewers.
In 2003 Sharon Case left the canvas for contract negotiations. When she returned, we learned the character had been in an abusive relationship with Cameron Kirsten. Cameron came to town on business with Newman and they kept their hook up secret. He blackmailed Sharon into meeting him at a hotel where he attempted to rape her. She stopped the attack by clocking him upside the head with a champagne bottle. Believing he was dead, she stuffed the body in her trunk with the help of Larry Warton. She drove around for days… Guess it wasn’t her week to carpool. Soon she started to hallucinate and saw his “ghost.” Surprisingly she went to her mother-in-law for help. They headed to the sewers where Sharon believed his body was to confirm he was dead. Seeing prim Nikki hip deep in sewer waste was comical and spoke of how the Newmans stuck together. Later we found Cameron wasn’t dead and the body in the sewer was actually Frank Barritt, Cassie’s biological dad. Eventually Cameron was caught and sent to jail for his crimes. Sharon manipulates Faith.
Sharon and Nick were on the path of his parents with an on again off again relationship when Nick fell for Avery, Phyllis’ sister. Sharon wanted her man back and used her child to do it. She encouraged Faith to be awful to Avery and guilt her father. At the time she was seeing Cassie’s ghost who told her to play dirty and win Nick back. Sharon made Faith believe Avery was the reason her family wasn’t together and with her gone they could be together again. In the end Avery was her own undoing by missing her wedding day to help her hunky ex Dylan. Sharon switches a paternity test.
Nick and Phyllis’ affair after Cassie’s death resulted in Summer Newman. Sharon hated that Nick chose Phyllis and her baby over their family. The question arose if Summer belonged to Jack or Nick. There was a problem with the paternity test only Nick knew about. He kept it secret for years. His conscience got to him and he ordered a new test. Sharon found out, during a bipolar episode and went after Nick again, sneaking into the lab to change the results to make Jack the father. Heartbreak and chaos ensued after this was revealed. Phyllis was devastated, as was Summer. Sharon felt guilty and went to the cemetery to talk with Cassie. Phyllis overheard her confession and boy was Red hot! She told Sharon she was going to out her to Nick right away. The ladies got into a shoving match in a stairwell as Sharon tried to stop the truth from coming out which ended with Phyllis falling down the stairs and winding up in a coma and only Sharon knowing the truth. The lie continued for about a year until Phyllis woke from her slumber and appeared at Nick and Sharon’s wedding no less. After Sharon was exposed Summer got her dad back and Sharon got help. Sharon marries Adam.
Finally her most controversial moment came when she married her former brother-in-law and the kidnapper of baby Faith. A surprise to many, their love helped Sharon as Adam cared a great deal for her and looked out for her well-being. They remain close friends.

Spotlight on: Y&R’s Adam acting out of character

Weekly spoiler video: Chelsea is out...