Soaps.com Chats With The Young and the Restless’s Steve Richard Harris!

Soaps.com: It's always good to get a name! Here's a question for you - at any time, did a blonde character named Sharon ever slip you her room key? We need to clear this up.

Steve: [mystified] No. [laughs] But at least they're talking about me! It's funny how people remember things though - remember I did an episode of "Sex and the City" years ago?

Soaps.com: Yes! You played the infamous gardener - the one who shared a kiss with Charlotte.

Steve: It was only one episode, and to this day, people still come up to me and say, "You're the gardener!" People recognize me more from that one episode than from all my years in the soaps.

Soaps.com: That was a huge show! What was that experience like for you?

Steve: It was interesting. [laughs] I didn't expect that it would be so graphic. Before we got on set they sort of threw that at me. They came over to me with this piece of material with double-sided tape and said, "Here's your wardrobe." [laughs] I was like, "You've gotta' be kidding me." But it was great, it was awesome, and Kristin Davis [Charlotte] was so sweet. It was a lot of fun.

Soaps.com: I hear that you're popular with the older women off screen as well - do you have a story to share?

Steve: [laughs] Yeah, my publicist and I went to a party somewhere in Beverly Hills and this older woman - elderly woman - a reporter for a magazine, was talking to us and she was just eyeing me - up and down, up and down - and she was a little lady too, her eyes were about chest level. [laughs] She was very touchy-feely with me all night, and at one point she actually grazed my private area - and gave me some twinkle-eye! That was really uncomfortable, yeah, it was an experience - but my publicist was in tears - he thought it was very funny!

Soaps.com: Wow! So, besides acting, you've also done some writing and directing.

Steve: Yes, I have a film out right now called "Signal Lost," I wrote the script - it's a short film - eighteen minutes - then brought it to my partner, Kenny Johnston, and he loved the script. He had directed before, I hadn't directed in the past, so he jumped on board and we were fortunate enough to get Sean Young ("Blade Runner," "Wall St.") to play the lead, and we got Tony Dennison ("The Closer") as well as Tyler Neitzel ("300"), and Sarah Dampf. So this little eighteen minute short film became this big thing out of nowhere! We were nominated for Best Short in the Method Fest in Calabasas, and we were just accepted into the L.A. Short Film Festival. I originally wrote it for myself to play the main character, but later realized he needed to be older, so I gave myself a small part in it. It's been great! I also have two other full-length features that I'm writing.

Soaps.com: Tell us a bit about what else you do, Steve.

Steve: I go back and forth between L.A. and New York. My family is there, and my father has a construction company - he always needs help with that. I also have a full family - three children, girls ages 5, 8, and 11 - so that keeps me busy! I love to go to the gym, write scripts, go to acting classes, and just playing with the kids on the weekends! We also have a puppy named Ginger and a bunny rabbit named Jack - the only other boy in my family! [laughs]

Soaps.com: When will we see you next on Y&R?

Steve: July 14th and 15th - I've taped those episodes and I'm holding steady on recurring. It would be a blessing to keep working on this show.

Soaps.com hopes we see plenty more of this down-to-earth actor in the future. To check out Steve in some of his other roles, including the infamous gardener scene from Sex and the City - click here! Would you like to see more of Aidan on the show? Do you remember Steve from other roles? Comment below! 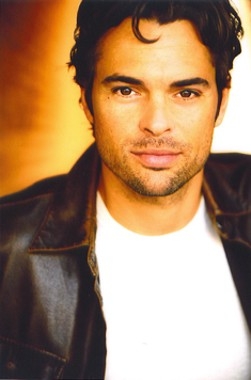 Soaps.com had the pleasure of touching base with actor Steve Richard Harris, who played the bartender at the Genoa City Athletic Club who recently wound up in bed with older woman Jill (Jess Walton)! Steve will be back, so we thought we’d get to know him, and find out the scoop!

Soaps.com: Congratulations on landing the role on The Young and the Restless! You’ve been on Daytime before, on One Life to Live and also on Another World, correct?

Steve: Yes! I was on Another World [as Zak Wilder]. I had a three-year contract, and was on for the final year run of the show. We got pulled off the air – just my luck! [laughs] My dad told me that I pulled that show down. “Don’t you ever do that again.” [laughs] Several years later I was offered the role [on One Life To Live], to replace Brandon Routh as Seth Anderson, and that was a four-year contract that lasted less than three years, after they fired our writers and producers and some actors, including myself.

Soaps.com: How has the set experience been at Y&R?

Steve: Well, now it’s so comfortable for me. I just go in there, and even though it’s a different studio, and actually a different state – I was always in New York – it just feels like home! I’m so relaxed and comfortable, and everyone is so sweet and laid-back – it’s just about getting in there and doing the work, and enjoying it, and then you leave. It’s been a blast.

Soaps.com: As short as your first scenes with Jill were, they were really good. As my friend, Diann, would say, “It’s nice to see a cougar get some tender vittles!” [Steve laughs out loud] What was it like working with Jess [Walton, Jill]?

Steve: She was so sweet, my God, what a sweetheart! I mean, she really made me feel so at home. That was my first day there, and she just made me feel so at ease – so comfortable. She was also appreciative of my work – complimenting me – it was really enjoyable. After I finished, actually, the scene in the bedroom, and we were wrapping for the day, she said, “That’s it?!” [Steve then said he might be back, we’ll see] She said, “Okay! Yeah, we’ll see!” [laughs]

Soaps.com: Sounds like you got Jess’s vote! Even though the part wasn’t a big one, it’s obvious you really come across on screen as not just a pretty face, but as an actor – which isn’t always the case.

Steve: For me, acting has always been, not to sound cliché, but it’s an art, and it’s always been a struggle to learn to perfect the ability to act natural in an imaginary situation. I’m always trying to deepen my experience as an actor, that way, when I do get a chance to ‘play’, I can really be in the moment and living that experience.

Soaps.com: So, you’ve been back since to tape more scenes at Y&R recently?

Steve: I’ve been there in the past two weeks. Yeah, I did two more episodes.

Soaps.com: Was it also with Jess?

Steve: Actually, it’s not! That’s what I was expecting, but it had nothing to do with her! I interact with Gloria [Judith Chapman]…

Steve: Yeah! And Jeff [Ted Shackleford]. And a really beautiful young girl, [checks script] Colleen [Tammin Sursok]! She was really sweet. They actually gave me a name too – Aidan. Before I was just the bartender.

The Young and the Restless Video Clip: Rafe's Reaction!

The Young and the Restless: Kate Linder Teams With Larry King!