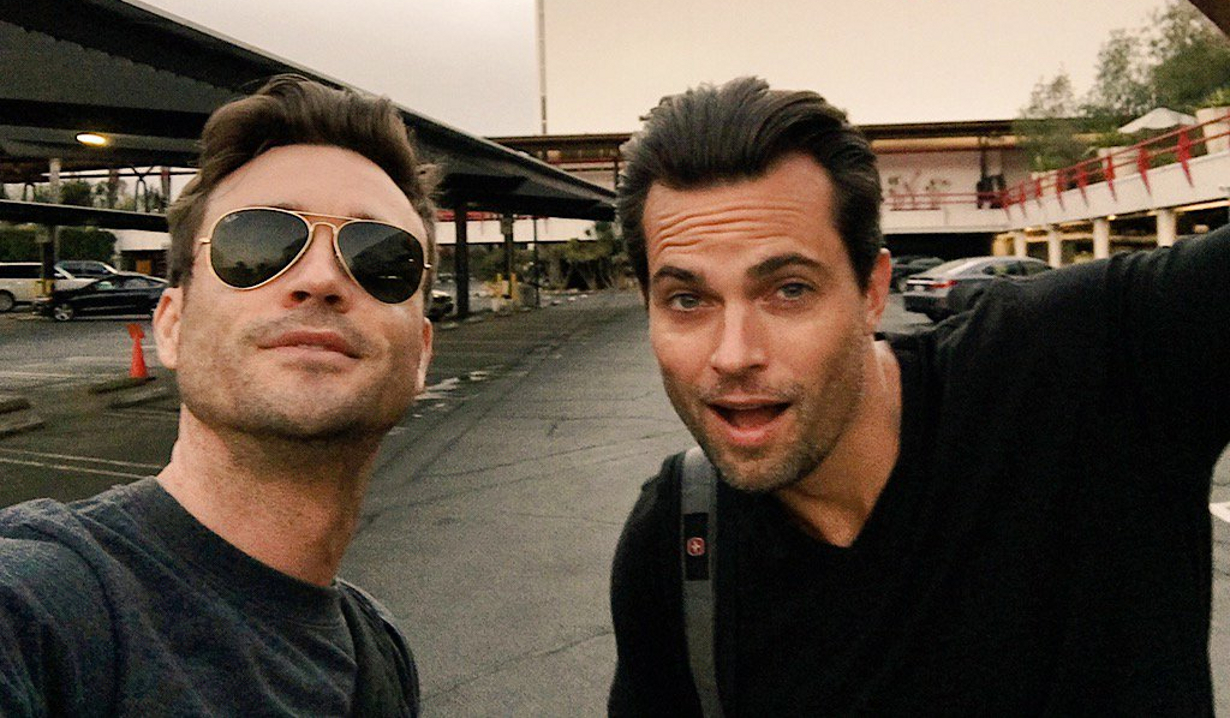 Don’t miss this quick guided tour of the latest tweets from the stars of “Y&R.” This time around, handsome couples, The Backstreet Boys, and addicted to cheese.

Good day.. With all the Back to the Future madness.. Here's a commercial I did for Pizza Hut and @BacktotheFuture https://t.co/ASr6AoPU2G

Cane may be having beef with Joe in Genoa city. But in real life u couldnt ask for a better mate than Scott! #YR pic.twitter.com/JHbphazXzy

My dog already does that….but thank you! https://t.co/GqEbs62qRF

Got to see Joey tonight and she gave me my birthday presents. Here's the card and one of the gifts…. This is love pic.twitter.com/QRNhL7Gukp

NOPE NOPE THIS DID NOT HAPPEN. OK IT HAPPENED THIS IS NOT A DRILL PEOPLE SOUND THE ALARMS @backstreetboys pic.twitter.com/6320mmXLUn

The Toronto tea is soon, so here's a photo from the 2013 tea! #ThrowbackThursday @KATELINDER @CJLeBlanc pic.twitter.com/zapLVUsWNr

? What SHOULD I sing? https://t.co/RSBVnsMKhH

I remember my first day…..;) https://t.co/mdJCEQrDqs

Once again you YR fans are fantastic! Greatly appreciate all the kind words this week. @YRInsider @YandR_CBS

One more reason dogs are the best things on the FREAKING PLANET. https://t.co/6NqgQFRGQk

Old man dancing by himself last night at @harvellessm… When I grow up, I wanna be like him. @ Santa… https://t.co/yqUscSOfoe

Who's your best friend? pic.twitter.com/EMx7LcAvrU

Those scenes from Monday's Y&R w @Hartleyjustin & @EBraeden…All I can say, Some of the best acting I've seen… Bravo!!!! #YR @YRInsider

Ahhh!!! SO long ago! https://t.co/WoReedvOLY

This song is kinda perfect. pic.twitter.com/MzN4lah0df

Thank you for all the birthday wishes yesterday 🙂 much love ❤️

Beer and a river and a resting rock. #camping #weekend pic.twitter.com/SR9Ai5VGje

Two things… @LifeInPiecesCBS is hilarious! One of my new favs! And @HunterHaleyKing was fantastic and beautiful on it!

Such a sweet & funny group of people! Thanks for having me #LifeInPieces ❤️ what a great bday! 🙂 pic.twitter.com/fBud9hAI7M

Meet me out front in 30 so I can tie a pork lion around your neck and then lock you outside. https://t.co/jfbMGh80zp

All around Great scenes on the air today! Excellent acting and damned good writing!

Not true. Who can count the solved cases? https://t.co/MQ9hdxAQBS

Don't place your happiness in temporary things that can be taken away from you!

Hope you will join @danielgoddard and me next weekend at the Woman's show in Stampede Park in Calgary… https://t.co/QreifjmYgV

Learn all of the details concerning how you can have high tea with Y&R’s Kate Linder and then discover why Candace thinks Cane is being set up in her Deconstructing Y&R.