Inside The Y & R Studios! 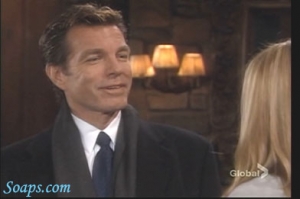 Last night’s TV Guide Channel’s new special “InFANity: The Young and The Restless allowed fans to get up-close and personal with not only their favorite soap, but with the stars as well. The show started off with host Lisa Joyner on the Y&R set of the Crimson Lights Coffeehouse where she gave a flashback of the many successful years and families of the show.

Y&R is the most dominate show with some of the longest running characters on TV and the writers intend to continue writing from their hearts to stay on top! Supervising Producer Edward Scott says that Y&R’s success is due to their desire to tackle many of today’s social issues.

In Victor Newman’s office, Lisa gives us a look into her interviews with Jeanne Cooper (Katherine), Peter Bergman (Jack), Eric Braeden (Victor) and Melody Thomas Scott (Nikki) Jeanne admits that she’s brought real-life struggles onto the screen with her facelift and credits four generations of being on the show as her biggest success! While Melody laughs about her character being married nine times, she met her real-life husband, Supervising Producer Edward Scott, on the set of the show and has been blessed ever since. Eric admits that his love for the job is what enables him to keep Victor real and says that in the beginning he only signed on for 3 months! When asked to describe Jack, Peter says that Jack has failed to live up to his father’s honest reputation and has decided to go to the dark side!

Behind the scenes, Lisa tells us that she spent the day watching the actors shoot more than 50 scenes! Sharon Case (Sharon), Christian LeBlanc (Michael), Don Diamont (Brad), and Michelle Stafford (Phyllis) express that though their days are long, the crew keeps them going! Sharon Case (Sharon) and Thad Luckinbill (JT) then show Lisa how to execute what the crew calls “The Tag,” which means to stare off at the end of a scene.

Lisa’s next stop is talking with some of Y&R’s hottest stars! Starting with Doug Davidson (Paul) who explains that his character is not easy to write, seeing as the detective is out trying to solve the crime and is always the last one to know! Tracey Bregman (Lauren) stopped to tell Lisa that she’s actually had death threats from fans who haven’t taken kindly to some of her character’s more scandalous storylines. Don Diamont talks about the excitement of his new storyline and the unveiling of Brad’s past. Kristoff St. John (Neil) thinks back on his initial job offer from the late Bill Bell and says that after the second day of shooting, sixteen years ago, Mr. Bill offered him a contract!

In Melody Thomas Scott's dressing room, Lisa looks at the magazine covered wall with all of the cover shots of Nikki and Victor! Here's a real treat for me, fans! While Melody expresses her love for Lucille Ball, she talks of my hometown in New York (where Lucy was from) where Melody frequents yearly as an acting board member for the Lucille Ball Museum! She then takes Lisa on a walk through Y&R's wardrobe section which is just immense and filled with all those awesome styles we envy every day on the show!

Lisa goes on to chat with more stars of the show Joshua Morrow tells Lisa that while off the set, he's had some strange run-ins with fans. Depending on what his character (Nick) was going through at the time, he's been slapped in an airport and had underwear thrown at him! Sharon Case describes her character, Sharon, as a woman finding her own shoes. Thad Luckinbill says he enjoys all the advice that the fans give him regarding how JT should act! Back in Melody's dressing room, Melody talks about all the hardships that Nikki has gone through. Peter Bergman laughs with Lisa and says that he's lost and bought Jabot a million times over! Jeanne expresses that throughout the years she's had so much fun!

Saving the best for last, Lisa talks to the actors about a place where all of us have imagined going at one time or another: on the set of those hot, steamy love scenes! Sharon Case (Sharon) and Don Diamont (Brad) agree that all the love scenes are very detailed by the crew. Tracey Bregman (Lauren) comments that you always seem to have an extra arm! Michelle Stafford (Phyllis) bucks up and admits that it's fun to make out with her co-stars.

Soaps.com wants to thank TV guide for giving our readers and us a peek into the set of our favorite daytime drama!

Behind the Scenes at Y & R!