Genoa City Police Department.
Um... So, a cop is dirty, and the Chief had to be told by two amateur sleuths, Kevin and Mariah. He then asked Kevin, who isn't even a police officer, to run the department while he investigated. This consisted of him asking his son, who also isn't a police officer or even employed at the GCPD, to conduct the investigation. Meanwhile, Kevin, who was 'running the department', left and followed the man he believed to be a killer back to the scene of the crime. Ack.

I forgive you...I can't trust you.
Viewers want so much more for Adam Newman than to be stuck on this relationship see-saw with Chelsea.

Wouldn't miss it for the world.
As I actually like Devon and Hilary together, the wedding story was the high point of the week, despite the looming black clouds of Colin's blackmail and Neil's out-of-character thirst for revenge. The wedding gathering was fun, with Phyllis crossing paths with Sharon, Michael and Lauren feeling each other out, Charlie and Mattie participating, and Esther making an enthusiastic appearance and mentioning Katherine. Lily confronted Colin, but it proved to be slightly less than satisfying as she backed off to consider her options rather than threatening to keep him from his grandchildren or rat him out to Jill; not entirely in keeping with her spitfire personality, but then characters are out of whack these days. Hilary confronted Neil after Nikki's warning, but ended up apologizing. Sigh. The character of Neil has always been defined by the type of father he is - willing to put his love for his children above all else - and that has been taken away to enable this plot. As mentioned in the last Deconstructing Y&R, a majority of viewers feel his actions are out-of-character - another Genoa City resident behaving like an imposter! If Neil were still drinking his actions might be believable, but supposedly he's sober. In any case, he is probably the person who walked into the wedding and raised everyone's eyebrows. Who knows what will happen next?

The above blog expresses a viewpoint. Please feel free to post your own remarks below. 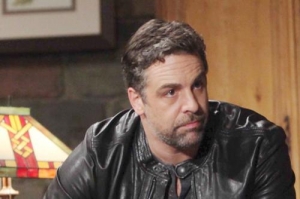 Credit: Who walked in?

There have been too many letdowns and too many characters acting unlike themselves to further plot-driven stories in Genoa City recently. We’re beginning to wonder if there are more doppelgangers on the loose. “The Young and the Restless” is also paling in comparison to sister soap, “The Bold and the Beautiful,” which is a comedown for the once-iconic soap. Thoughts:

The killer revealed.
After all these months of the dreadful cabin killer storyline centered around the deaths of two characters viewers didn’t really care about, the big payoff is that a recurring character, a detective we’ve barely seen in months, is revealed as the killer? Doing the bidding of a South American drug lord no less? Ugh. Adding insult to injury, Harding is actually a character that many felt had the potential to be developed into a main player, unlike so many of the characters currently featuring despite not ‘clicking’ with the fans. A fail all around, and we’re not even surprised.

Paragon Project.
Regardless of who ends up being behind this plot we never heard of before, the idea that Victor put a diabolical plan into motion that would put Jack’s life in grave danger and put Phyllis at the mercy of Marco, a dangerous criminal, based on an assumption is nothing short of insulting to the character. Now that Victor knows Jack wasn’t behind it (because he asked Phyllis!), he is accusing every Abbott that walks through his office door of being the mastermind behind the plot. Seriously? Perhaps there is a Victor doppelganger too because it’s basically inconceivable to think that the all-knowing Victor Newman wouldn’t have been able to pinpoint exactly who was behind the Paragon Project as soon as he learned of its existence. The fact that after all of these months he still is floundering around with no idea who he’s up against is kind of unfathomable. Also, as we’ve said before, Victor never would have put Phyllis in the position he did knowingly – in the past his plots have cost others dearly, but it’s always been when things have spun out of his control. The whole doppelganger storyline gets more obnoxious the more you consider it.

Not up to hearing it.
So, is Abby too self-centered or too vacant-headed to give Stitch intelligent and compassionate feedback on his troubles? It’s odd to write her as ‘killing it’ as a C.O.O. and savvy enough to bluff her way through meetings and conventions, yet not able to do the same in her relationship – she’s either on the ball or she’s not. Either way, as we’ve known all along, he’s better with Ashley, who can ‘handle’ his adult issues and doesn’t just try to distract him with sex. 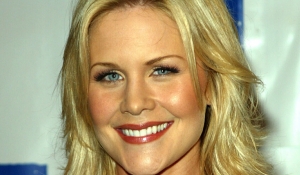 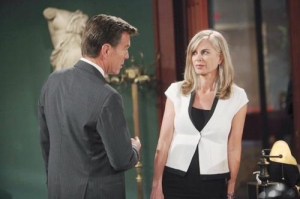