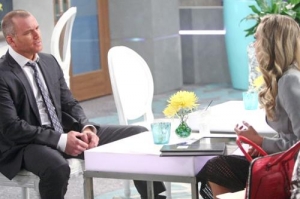 Some folks in Genoa City continued to behave in ways that are out-of-character to further plots, and it’s a niggling issue. Thoughts:

Scooby Doo gang.
At this point, you almost have to feel sorry for Marisa, who has become the latest focus of Genoa City’s somewhat rabid group of amateur detectives, not to mention the annoying and bitchy Abby. Many complained that no one asked Marisa what Marco looks like, but don’t forget we didn’t actually see Harding interrogate her. As for Marisa and Noah, they continued to work their way toward sex. It’s funny that he keeps bringing her food. Their chemistry is solid, but I feel like noble and sweet is only going to get Noah so far with a woman who’s so worldly.

Ultrasound encounter.
Sharon was supportive of Sage at the hospital, and any doubt about Sharon’s pregnancy being real was removed when she and Dylan got their ultrasound. Sage returned to The Underground, where Noah had talked Nick down and they reconciled. Sage is fine for now, but with Victor whispering in Nick’s ear about trust, and the secret of Adam’s identity looming…yike. As for Sharon and Dylan, while she seemed perfectly sane at the hospital, later at Crimson Lights she began to show signs of being off her meds when she suggested to Dylan that he should leave her now and that he was only with her because of the baby. It’s kind of fatiguing to realize they’re going to go down this road with Sharon yet again.

I’ve got your back.
One character who is going exactly the direction I’d hoped for is Stitch. He was reinstated as a doctor, they reminded us that he is a mature veteran of war, and they had him realize that he’s not at all on the same level as Abby. Loved his face in the scene where she compared his relationships with his war comrades to her and Gabe at Newman-Abbott. Priceless! Of course, he didn’t clue in before he had sex with her one more time. This makes me worry that just as he gravitates to Ashley, Abby will come up preggers, thereby upping the ick factor. Sigh.

I’m suffering plenty.
Either the writers have decided to soften the Adam Newman character or they need to study up. Adam running all over Genoa City acting like an emotional wreck is so not him. Taking Connor and then changing his mind? Never! Adam doesn’t make a move that isn’t calculated to achieve his goals, and he has historically been capable of extreme coldness and ruthlessness when not getting what he wants. Remember how he turned on Sharon when she rejected him? As mentioned in the last Deconstructing Y&R, the Chelsea and Adam stuff has become a drag.

Revenge fantasies.
Are we to believe that Neil has gone utterly off the deep end? What he is doing is just not true-to-character. Paying the unscrupulous Colin to set up Devon was, well, gross. He also bold-face lied to his pal Nikki that he wouldn't act on his revenge fantasies! While the idea of Colin being more dastardly is fun, I couldn't help but wish for Jill to appear, figure out what he'd done and cuff him upside the head. In other wedding planning news, Hilary's interaction with Lauren was good in that it led to Lauren taking a step to forgive Michael. Hilary and Lily's interaction gave Cane another platform to lash out. Their clashes have been pretty entertaining. Despite her regrets, Lily stands her ground and gives it right back to him. Neil also stood up for Lily, and said she will always be his daughter no matter what she did - um, he always felt the same about Devon, even when they slept with the same woman in the past etc. Neil's current behavior is clearly plot-driven.

Minor heart attack.
I think Christine has caused a fair amount of Paul's stress. Just sayin'! Anyway, was the heart attack to get Paul out of the police station? Is something going to happen there without his watchful eye on things? Or is it pointless like Ashley's brain surgery? Hmm.

The truth.
"There were two of me." Oh, Jack saying that line to Phyllis made me cringe; it's all so ridiculous. In any case, hearing about the exhilarating Marco prompted Jack to come clean. I was glad things took a turn because the heartfelt speeches were taking their toll. Conveniently, Jack decided to break the news to Phyllis in Istanbul rather than Genoa City. Something tells me she won't waste any time getting back to confront a certain someone, which will be a refreshing change from the Phyllis who retired upstairs to let Jack and 'Gabe' talk instead of acting true-to-character and listening in to find out exactly what was going on.

This blog reflects an opinion. Use the comment section below to voice your views.