She may have worked for Katherine for many, many years but do you recall when Esther went to work for Nina?

The previous week's answer was... Bobby told Nikki, "It's too bad you're taken." 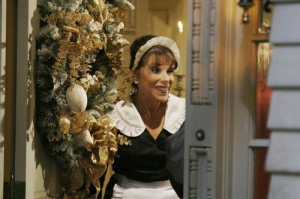 Soaps.com takes readers to the Chancellor Estate in 1994 when Norman Peterson tried to get Esther Valentine to forgive him in this week’s “The Young and the Restless” Throwback Thursday poll…

Phyllis recently received all of the details about Marco from Jack and came face to face with the con-man himself. Years ago, Esther answered a personal ad and ended up marrying one. In the beginning Esther allowed Norman to believe she was the lady of the manor, which Katherine and her husband Rex Sterling went along with. When Norman found out she was simply the maid, he filed for divorce.

However, feeling as though he could still reap all of the benefits being at the estate offered, Norman paid Esther a visit and apologized for jumping the gun. Katherine stood by Esther’s side as Norman showered her with apologies. Esther hung on his every word until Katherine interrupted with warnings that he was trying to play her for a fool once again. Do you remember if Esther took Norman back?