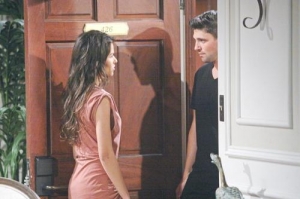 The good news is that things moved along this week on “Y&R.” Information came to light and there were at least a couple of reveals. The bad news is that it still felt convoluted in some respects. Thoughts:

Getting frisky.
Once again, Abby was made to look like a real ditz as she got tipsy with the male warehouse representative while acting as C.O.O. and accepted a ride with him, which led to her ending up in the hospital whining that no one was taking her seriously. Sigh. I suspect it was all designed to make her appear too self-involved, flaky and immature for Stitch. If that’s the case it worked…though we’ve already known that for a while. That brings us to Stitch and Ashley. He can’t get her off his mind, she clearly still has eyes for him, and they nearly kissed. Bottom line: Ashley and Stitch make a better match and have chemistry. This is nothing new, it’s just unfortunate that they put him with Abby in the interim because it’s a bit icky rooting for him and Ashley to get together. Nonetheless, I’m rooting for them. Sorry, not sorry.

Reaching an understanding.
Jack woke up! It was so great for about five minutes until it became apparent that Marco’s entire existence in Genoa City would be kept under wraps. Honestly, soap characters never learn. Jack’s ass will be grass when Phyllis finally hears that she was bedding a South American drug lord imposter for months courtesy of Victor…and Jack knew and didn’t tell her! Ugh. Anyway, with all of the not-so-hushed confrontations at Jack’s bedside, the upshot is that poor beleaguered Paul won’t be able to pin anything on anyone and Jack will presumably be moving forward seeking revenge on Victor with Adam as his minion. One of the most entertaining aspects of this mess, including the in-fighting over at Newman-Abbott is Ashley as the voice of reason. She was the only one to confront Victor and to point out to the others how ludicrous it was that Victor and Jack met up in the park for what was for all intents and purposes a duel, and now are saying ‘bygones’ and going back to being partners. Her line, “What is this, the Wild West?” struck me as funny and fitting on a couple of levels. Marisa has also been used solidly in this storyline as she imparted key information to Victor – that he shot Jack not Marco – and shared something from her past that could make Victor protective of her down the road – she was an orphan.

Bad dream.
Chelsea running interference and worrying about Adam's identity being revealed at every turn isn't particularly entertaining. Next.

Lost her way.
As noted in the last Deconstructing Y&R, we saw some of the most intense Avery scenes in the weeks before the character elected to leave town, which made the goodbyes a little bittersweet. The farewells with Phyllis, Michael, Nick, and Dylan were low-key and not dragged out - they felt about right. Thankfully we were spared a blubbery goodbye with Summer.

Spoon fed.
The Scooby Doo mystery machine revved up again with the new information that Marisa's ex-boyfriend was Marco, that he was in town at the time of the cabin murders, and that he had supposedly drown in the lake. It was fabulous to see Noah's more intense side as he became protective of Marisa. "I'm not going to risk her life because you don't like her." Not as fabulous was Kevin telling Mariah they were going for a swim in the lake with Marco's dead body. Ew! Vote in Soaps.com's Y&R Poll: Marisa and Noah.

Were you ever going to tell me?
No Nick, Sage was not ever going to tell you. It was a pleasant surprise when Nick actually found the DNA test, Sage 'fessed up, and the results were revealed all in one episode. Refreshing! Had to laugh at Nick being all outraged over the woman he loves lying to him. It's pretty much par for the course in his life; he should hardly bat an eyelash over that stuff anymore. Hehe.

This is an opinion blog. Please leave your comments in the section provided below.