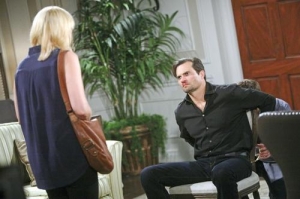 Viewers seem to be either loving or hating the happenings in Genoa City right now. It’s a bonus that so much is going on, but there are still niggling issues that just don’t go away. Thoughts:

Leaving Genoa City.
The Avery/Joe/Dylan storyline peaked in dramatic fashion with the showdown at gunpoint in Joe’s suite. It was actually fairly riveting and who doesn’t love Paul bursting through a door, gun drawn, hollering, “GCPD! Drop the gun!” Always good soapy fun. In the end, despite the unsavory turn the story took, and how out-of-nowhere it seemed, it had a message, and we were certainly treated to some fabulous acting from Jessica Collins, who was particularly good in the subtle vulnerable moments in which she seemed emotionally spent. I’m not sure what lies ahead for the likes of Joe in Genoa City, but as for Dylan, he seems to be settling in to his new life with Sharon.

Main squeeze.
In last week’s Deconstructing Y&R, I pleaded for the end of Jack’s coma and the tedious bedside scenes. It hasn’t happened yet, but the ridiculousness continued with Phyllis garnering info from Jack via hand squeezes and notepad, and worse, letting Marisa walk on out of Jack’s room without giving a proper explanation for her presence there. Phyllis sensed that the woman knew Jack, and he confirmed it by squeezing once (oy), and yet our Phyllis didn’t go after her like a rabid wolverine. What? We all know that is exactly what she would have done…

Anniversary blues.
Summer schlepped across town to bring her own special brand of gloom and doom to Noah at The Underground, this time courtesy of her one year anniversary of marrying Austin. She later told the same sad tale to Kyle, but how upset was she really since they had sex within minutes? Of course their scene wasn’t complete without reminding us that they are star-crossed lovers from rival families. Please. No one is trying to keep them apart; no one even seems to care – including viewers who are left cold by the phony angst every time.

Adam revealed.
Or not. The scenes in which Chelsea learned the truth about Adam's identity and reacted were very well done. She was all over the place emotionally as you'd expect and Adam's intensity was palpable. Later, Chelsea stopped him from telling everyone else, which means this will continue on for who knows how long with just a few people still in the loop. Viewers were on the fence and all over the field about these developments. While some ate it up, there were those who expected bigger more explosive things when Chelsea found out. Others were unmoved by the entire reveal, saying the writers had already dragged it out too long, and that Chelsea and 'Gabe' hooking up so many times stole the impact from a Chelsea/Adam reunion. Those who have been ready for Adam to go the full monty for a while now, thought that Chelsea's last minute decision to keep his secret was disappointing - just dragging things out even longer. What did you think of Chelsea stopping Adam from coming clean? Vote in Soaps.com's Y&R Poll: Chelsea keeping Adam's secret.

Paging Dr. Feelgood.
Well, they're clearly 'going there' with a Ben/Abby/Ashley triangle. While Abby was too busy drinking and schmoozing a male executive to celebrate with Ben, he was spending more time with her mother, who he had only hours before spun around gleefully in the hospital corridor. Yep.

He deserved worse.
Well, Cane certainly upped the ante in the conflict with Lily as he threatened to take her kids away for sleeping with Joe. It was nice to see Lily, who only moments before had been overly conciliatory and apologetic, spring into mama bear mode. Elsewhere, Devon and Hilary's life seemed almost normal as they talked wedding plans and looked at brochures. Hilary's remark about the teeny guest list was funny. Neil, meanwhile, was missing in action following his run-in with The Mustache.

This column expresses an opinion only. Please weigh in below.

The Young and the Restless weekly...