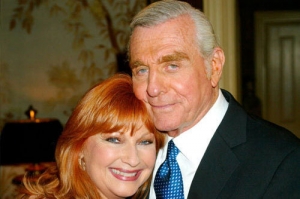 “Nobody else in the family noticed.”

Soaps.com’s Throwback Thursday poll takes readers back to the late 1980s when “The Young and the Restless'” John Abbott learned about his daughter Traci’s engagement to Tim Sullivan…

It’s becoming clear that Stitch and Ashley’s romantic connection isn’t completely over. Years ago, John questioned Traci’s relationship with Tim after noticing an engagement ring on her finger. He arrived home one day to see the ring, wondering why Traci hadn’t told him prior. Traci knew the family was busy with Jabot and admitted no one, not even John, had noticed the ring all day. He felt awful and assured Traci she was more important than business.

John didn’t want to interfere but had some worries considering Tim cheated on her in the past. This wasn’t the only time John worried about his daughter. Traci was once addicted to pills and also got into a catfight with Lauren Fenmore over Brad Carlton. Traci promised she was happy and that Tim was the reason she was able to put her life back together.

Tim arrived and John made it clear he knew about the engagement and told Tim he only had one concern. Do you remember John’s main concern over Traci and Tim’s engagement?

Was your answer right in last week's poll? Nina gave Phillip a framed photo of them kissing.