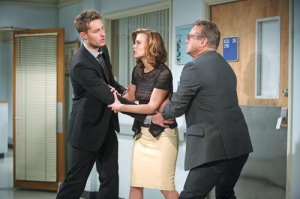 The intrigue surrounding the shooting, the surprise match-up of Noah and Marisa, and Lily softening toward Devon were Genoa City highlights this week. Thoughts:

Shooting in Chancellor Park.
Adam getting himself well and truly twisted up in this shooting mess has been the best part of all this, since it pits him firmly in a battle of wits with Victor, with Jack as the wildcard. It’s also fun that Victor still thinks Jack is Marco. It’s anyone’s guess if Marco actually perished in the lake, and even though it would be a relief for the stupid doppelganger tale to end, there’s no denying he was entertaining. Marco was like a throwback to Jack’s former playboy days. Nowadays, even while in a coma and seriously pissed off, Jack is telepathically aiming choked-up, heartfelt drivel-y thoughts at Phyllis. Jeeze. It’s enough to make you wish Marco would stride in there, slap Phyllis’ ass, and take her out to paint the town. Speaking of Phyllis, viewers weren’t happy about her being befuddled by a doppelganger for so long. Phyllis is supposed to be an incredibly astute character. Let’s face it, the former Phyllis not only would have long ago figured out Gabe was Adam and have found a way to use the information to her advantage, but she also would have known Marco wasn’t Jack. You know, like Marisa knew Jack wasn’t Marco…sigh. Anyway, it will be interesting to see how everything comes out in the wash with Jack/Victor/Adam.

Tied together.
I was a little unclear as to how Kevin was making a connection between Austin and Courtney’s murders and Jack’s shooting, but it was good to see him and Mariah in scenes again.

Noah helps Marisa.
It’s all fine and good for Noah to be a nice, considerate, American boy outside of the bedroom, but here’s hoping if he and Marisa hit the sheets we see a whole different animal. Many have been waiting a long time for them to pair Noah up with a woman like this and don’t want to be disappointed!

I didn't do it.
I've been wishing the whole Avery/Joe story would just go away since she suddenly remembered he abused her when they were married and I'm still wishing. Dylan, who was violating a restraining order, showing up at Joe's suite to confront him and tie him up was bad enough, but Avery going there when she believed he had brutally attacked and raped her? No words. Most readers polled through last week's Deconstructing Y&R indicated they believe Joe was set up.

In the trash.
So, Sharon made up with Mariah, but secretly decided to stop taking her meds. Viewers are pretty fatigued with Sharon being depicted as 'crazy', so I don't expect anything that happens next will go over well. Many have also been speculating that she is faking being pregnant. Vote in Soaps.com's Y&R Poll: Is Sharon faking her pregnancy?

Fireworks.
Ben's character was already close to ruined, so it's anyone's guess how they could have him go from Abby to her mother, Ashley, without finishing the job. A shame...

Fourth of July miracle.
As expected, Lily eased up on Hilary and Devon, and it made for some good scenes. Now Devon will be there for her when it comes out that she cheated on Cane. What will be really interesting to see is if Neil will give her a pass.

This column expresses an opinion. Feel free to comment below.