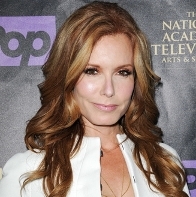 Actress Tracey Bregman, who plays Genoa City’s Lauren Fenmore, took to Twitter to announce her involvement in the third season of “Living With Models.”

The project, which is raising funding via Kickstarter, also features Teri Polo (“Meet the Parents,” “The Fosters”) and will pick up with all of the models waking up on the shores of a mysterious island, where they will have to band together to survive as-yet-unknown perils.

Please view the video for the Kickstarter campaign in Bregman’s tweet below:

Check this out!! I will be part of Season 3!! @LivingwModels http://t.co/2IHPON3EWR

Watch a clip of Tracey Bregman on Home & Family. Go back in time to Lauren Fenmore’s 21st birthday.