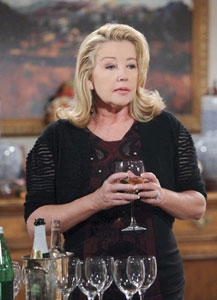 “The Young and the Restless” will air a special episode on May 28 devoted solely to Nikki Newman’s (Melody Thomas Scott) intervention for her drinking after days of increasing buildup.

In an interview with TV Insider, the actress gives some insight into how bad things get for her character in Genoa City and what triggers the intervention… her family pretends to be gathering for a special dinner, but as soon as she sees Dylan she knows it is a setup.

Thomas Scott also talks about how she likes the new writing staff at “Y&R” – despite being worried when Chuck Pratt first came on board and began causing chaos for the characters. She was the last person on the cast to meet Pratt, but their first interaction lasted an hour and a half and resulted in the intervention storyline.

She even dishes about if there could even be a romance between Nikki and Neil! “Don’t give up on that! You may get your wish. Kristoff St. John and I are so hoping for a romance. It would be the most unlikely pairing, yet it also makes sense because they share the same addiction and they’ve known each other forever,” she revealed. “If it does happen, the s—t will hit the fan with Victor. And wouldn’t that be fun?”

The Young And The Restless Spoiler Video: No New Leads