Must have fallen out of your pants.
The growing sexual tension between Sharon and Dylan leaves me wanting more, and the huge confrontation with Avery was the most entertaining thing our blonde attorney has been involved in for a long time. It was an interesting choice to have Sharon come clean about sending the text too. She has to face the music with Dylan, but something tells me all roads lead to sex with these two. It's odd that they have Sharon acting occasionally off-the-wall. Is she off her meds? If so, why?

Miracle.
Sage is pregnant. Wow! She had said she couldn't get pregnant of course...yeesh. Anyway, I guess from her flashbacks we're to gather that the father could be Nick or Adam, even though she slept with Adam less than a week ago. Gah. I guess the bottom line is that this pregnancy will almost certainly stir up trouble for both men. Sharon already told Nick he should stop seeing Sage for Faith's sake (super ridiculous!), and Adam of course is on track to get Chelsea back and knocking up Sage definitely wasn't part of that plan. Vote in Soaps.com's Y&R Poll: Sage's Baby.

From the beginning.
If only the killer would strike the Scooby Gang again... Fen showed up and announced that he had been in contact with the killer - from the beginning - and we still didn't care. Mariah and Kevin enhance every scene with this group, but as discussed in last week's Restless Rant, Summer and Kyle are wholly unappealing, and the forced pairing of Ben and Abby is cringe-worthy. Noah is a cutie, but might as well be furniture as they've really no idea how to use him.

Friday's episode.
Did Sharon and Dylan get busy? Let me know! It's up to Soaps.com readers to fill in and provide the commentary on the last episode of the week as I have gone to Germany to meet my new baby granddaughter, and was unable to watch. Post below! 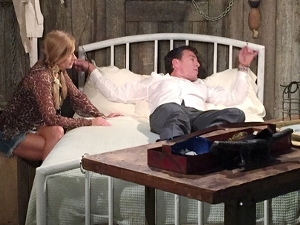 The character-driven stuff surrounding Adam/Chelsea, Adam/Victor, and Dylan/Sharon continues to work best. The business storyline provided some entertaining conflict, but the doppelganger side of it is wearing thin with viewers. Thoughts:

Seize the day.
After Chelsea had sex with ‘Gabriel’ and called out Adam’s name, she became upset that Adam might be the only man she’ll ever love and threw ‘Gabe’ out. I like the aspect of her being so attracted to ‘Gabe’ without knowing the real reason why, and also the irony of Adam, as Gabriel, essentially being in competition with his former self. This storyline continues to work because viewers know what Adam is feeling whenever he’s with Chelsea and they also understand the potential implications of the reveal of his true identity for him and the pairing.

Darth Victor.
The whole forged signature bit seemed trumped-up, but it did make for a few interesting confrontations. As for the doppelganger story, while the acting is a-one, the longer this goes on the more uncomfortable it becomes to watch Jack being victimized by cartoon-y looney Kelly, and Phyllis continue to be pawed by a veritable stranger. It remains implausible that Victor would go to these lengths to best Jack or to takeover Jabot for no apparent reason. It’s not unusual for Victor’s schemes to result in someone being hurt or even killed, but usually it’s as collateral damage, not by design. It’s bizarre to think he’s okay with what is happening to Phyllis, and there was a certain integrity to his rivalry with Jack that is being ignored in this story. This is true even more so with Ashley, for whom Victor has had a huge soft spot historically. As for Billy 2.0, it was a good call to write that line in as he is like an entirely new character. The best thing coming out of all this currently is the Adam/Victor stuff (they’ve fallen back into their old pattern of verbal sparring and one-upmanship), and Adam being installed in a position equal to Victoria’s. If I was her I’d just leave… again.

Toast to paradise.
Kelly dragging a drugged Jack around the room in a ‘first dance’ was about as unappetizing as it gets. How long will they string this out with the island cops who are clueless one minute and on the phone conspiring with Victor the next, the Ghost John appearances, and Kelly and her phony press releases and “Hee Haw” get-ups?

Karma’s a bitch.
It was a good move for Hilary and Devon to finally be on the up-and-up. Neil’s sour and bitter routine is getting old. I’d like to see him move on, but not by kissing the next available female, aka Gwen from accounting, which just seemed dumb. It also feels like moving backwards for him to be working for Victor again and, worse, doing his dirty work.

The Young And The Restless Spoiler Video: Back Off 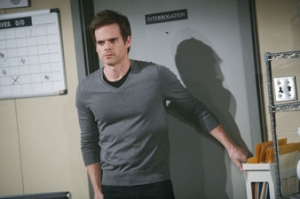