You have to let me go.
It was a breakthrough of sorts for us to finally gain insight into Michael's inner feelings, thoughts, and pain, even if, bizarrely, it was through a prostitute. His stance is still frustrating though. As for Cane's preoccupation with helping Lauren, it's not unbelievable that he would unwittingly develop feelings for someone he's become a confidante to and is working closely with, but it doesn't seem to have gone that far yet. However, Lily can see the potential...

Go public?
It looks to me like Devon and Hilary will go public with their romance and face whatever Neil (and others) will dish out. It's good to see Neil back at work, but it would also be nice to see him bounce back a bit from that whole cheatin' drama so he doesn't come across so bitter. Perhaps his friendship with Nikki will see him through... and then she'll find out he and Victor duped her into signing those papers. Yike. And she was already eyeballing the scotch; a good call since it seemed she quit drinking altogether too easily.

Jack/Yack.
Things weren't so good for the doppelganger storyline. As mentioned in last week's Restless Rant, Yack has been pretty entertaining, but Yack in the hospital just made for a week of those awful heartfelt bedside speeches. I just sighed, groaned, and slumped down in my chair every time another one started. Eck. The business with the contracts and forged signatures was pretty unpalatable too. How will Billy prove it's not Jack's signature? Meanwhile, down in the 'undisclosed location' things took a turn in Jack's favor when he stabbed Kelly and got a hold of her phone, but it was downhill from there when the cops proved to be as dumb as Kelly is looney. It's really irksome how they've turned Kelly's 'crazy' into the cartoonish variety. It's similar to when they had Sharon do her loose cannon routine, hollering and making the big eyes, at The Underground re-opening. It's so over-the-top and there was no real explanation for it.

This blog is stating an opinion. Please leave your own thoughts below. We love to read them! 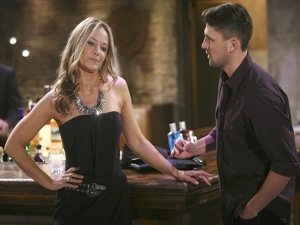 It’s a mixed bag for “Y&R” this week. Some material feels like it’s being written too deliberately to ‘shake things up’, which is good in that it’s not boring, but not so good if it doesn’t feel right for the character or believable. Other material is working quite well, and again, notably, it’s the more character-driven stuff to which viewers can relate. Thoughts:

What’s the status of things?
The whole drama surrounding Abby blurting to Ashley that she and Ben ‘have something real’, and his lack of response, was a trumped-up mess. Victoria walking in and asking about the status of things right after it happened was funny, but other than that there was nothing to feel about any of it. Abby and Ben’s ‘relationship’ was a written-in, forced plot point and, accordingly, their manufactured conflict and reconciliation left us cold. Similarly, the relationship ‘drama’ between sulky Summer and sullen Kyle evokes nothing beyond the desire to hit the fast-forward button. These two core characters need overhauling if they are to find an audience to root for them.

Goodbye Avery.
While Dylan’s tension with Avery has been believable enough, his battles with Paul, not so much. Don’t get me wrong, the conflict is entertaining to watch, but it’s just not Paul. His level of irritability needs to be dialed down so he’s not acting out-of-character. Paul’s a sweet guy, not this totally unreasonable crabapple, and he’s been on too long to change that. We can chalk it up to losing the baby for now, but he needs to get back to himself. As for Dylan and Sharon, they are the definition of a pairing developing feelings organically over time by being in close proximity and as a result their kiss gave us the butterflies! The ensuing awkwardness was tangible, realistic, and sort of cute. That brings us to Avery, who received Sharon’s ‘stay there’ text (muhaha!) and will likely do just that. Avery and Joe are a comfortable match, but dull. I feel like he could be extremely sexy in the right scenario with the right woman. Perhaps a Dylan/Sharon/Joe triangle would be more fun. Vote in Soaps.com’s Y&R Poll: Sharon and Dylan.

The Young And The Restless Spoiler Video: Sweet Satisfaction