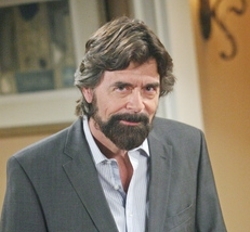 Actor Frank Runyeon, well known for his previous daytime roles as Steve Andropoulos on “As The World Turns,” Father Michael Donnelly on “Santa Barbara,” and Forrester Williams on “All My Children,” is set to appear to a Genoa City resident as an angel named Angel on “The Young and the Restless,” according to TV Insider.

Runyeon, who travels part of the year doing one-man shows in churches, is also writing a book entitled, Escape From Hollywood: An Actor’s Unlikely Journey to Faith. Find out more about his shows through Frank Runyeon Productions.

Read Soaps.com’s Restless Rant weekly blog for thoughts on Kelly being ‘dangerous and deluded’, and watch our 2015 Daytime Emmys Interviews including one where Y&R’s Max Ehrich teases Fen’s return.

The Young And The Restless Spoiler Video: Accident