Stop talking and start moving.
As mentioned in last week's Restless Rant, the writing is on the wall for Dylan and Avery's relationship and this week they grew further apart. There is something slowly building between Dylan and Sharon; it's at a smoulder and there's the sense that it's only a matter of time before they act on it. Love it. Joe and Avery have their moments, but she kind of kills it, as she often did with Dylan, by acting more like his mother than a love interest.

Stability.
It was cool of Sharon to go to bat for Nick so Faith would stay with him, but it was a tad strange that Faith would have led a therapist to believe she was afraid of Nick. A bit trumped up.

Evidence face-off.
Getting Michael involved in defending Sharon definitely helped this storyline. He's just so capable and no-nonsense that you can't help but feel he'll navigate through all the crap much more efficiently than anyone else. As more evidence came to light this week we had to endure several scenes with the the Scooby Doo gang yammering at each other, but at least Summer's latest tirade yielded results when it caused Kevin to twig on what was wrong with the phony screenshot. As for Kyle's extravagant surprises for Summer not going over well with her, it just seemed like so much baloney, and honestly this just isn't an appealing pairing to begin with.

Alpha Dog.
This Newman-Abbott company drama seems so surreal. Too much happened seemingly overnight. Victor and Victoria were installed at Jabot, Stitch and Victoria split and he took up with Abby, and the lab became a glass room full of animosity. Victor now splits his time between monitoring Fake Jack's behavior and refereeing between Victoria and the others. Victoria, we're supposed to believe, is thrilled about taking over this teeny glass office space in Ashley's lab and lording it over her. It's curious that she'd be happy about this when she was so keen on relaunching her Brash & Sassy line from her huge office (complete with daycare) over at Newman Towers. With so many players in the mix, however, this has great potential beyond people cramming into the lab to bicker. Some of the exchanges have been pretty intense already and with Adam, Chelsea, and Neil coming back on board it will only get more volatile over there. Most interesting new development - Adam agreeing to act as a mediator for Victor - these two sniffing around each other is fantastic.

Check out Soaps.com's 2015 Daytime Emmys Interviews including 9 from "Y&R" cast members and CBS' Angelica McDaniel who commented on the state of the soaps industry. "They dominated." 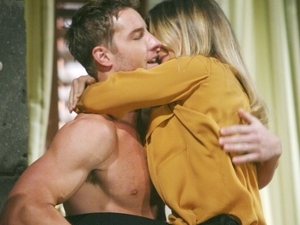 Some things are still sideways in Genoa City, but there was more to like this week. Thoughts:

Steps back.
However sordid it all got, Devon and Hilary are in love, and those invested in the pairing were treated to seeing them finally come back together in private. However, it seems that left them with the same dilemma – go public and risk Neil’s wrath or see each other secretly? Here’s hoping they handle it differently this time regardless of the consequences. Neil will eventually accept it and move on. Right?

Not my first rodeo.
Of course it’s completely unbelievable that Jack’s double would have the same body and voice as Jack, and it’s icky that Phyllis keeps sleeping with this stranger, but there is no denying he’s pretty entertaining. His antics are keeping The Mustache hopping that’s for sure. Who didn’t laugh out loud when Victor caught him on the phone ordering up a Ferrari? Too funny! Of course the lookalike could be very bad news for Adam, who hopefully catches on that Fake Jack doesn’t know his true identity before he reveals anything else. In any case, it would be interesting to know Victor’s long-term vision for this whole plan with the Jacks. Is real Jack supposed to waft off into a life of bliss with Kelly while Fake Jack drifts into retirement, leaving Victor in charge of Jabot? Or does Victor just want enough time to run Jabot into the ground before bringing Jack back? Hmm.

We can have everything we wanted.
Wow, so Kelly is completely deluded and dangerous. For me this kind of stuff is too over-the-top, and it’s too far from what the character started out as to really work, but it is what it is. If Jack is going to get out of this he needs to calm down and outsmart her. Here’s hoping it doesn’t take too long.

Day-drinking never ends well.
The Adam/Sage hook-up was easily my favorite unexpected development of the week. Smokin’ hot and so much snark! Vote in Soaps.com’s Y&R Poll: Sage and Adam.

Let’s go throw us some rice.
Fake Jack in his golf attire was just one of the entertaining aspects of the Billy/Chelsea non-wedding. From the moment Billy overheard Chelsea and ‘Gabe’ talking and realized they’d slept together, and he still wanted to go ahead with the wedding, we knew what was going to happen. The anticipation was kinda’ fun and so was the moment when Billy revealed to his bride what he knew about her, but this Billy is always sort of ‘buttoned up’ even when he’s angry. Notably, Billy seemed to also forget his own past transgressions throughout all of this, but that’s par for the course on soap operas. As for the gathering, Billy’s key players all attended except Victoria, but it’s getting really tiresome for Billy’s mother not to be involved in any of his important scenes – there’s always an excuse made, but it’s a shame because Jill was sorely missed in this case. She never accepted Chelsea and definitely would have had a lot to say! Also puzzling was Chelsea not trying to defend herself even a bit by saying, “I saw you making out with Victoria!” Anyway, Adam came back to comfort Chelsea, but she lashed out and blamed him, so any progress he made is pretty much down the drain. Back to square one… 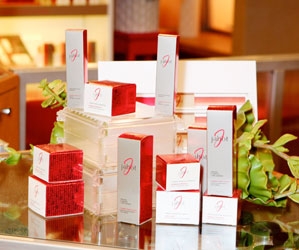