Vote in our Throwback Thursday poll surrounding B&B's Maggie's new friend and read Soaps.com's Where Are They Now column for details on "Y&R" alums (ex-Ronan/ex-Isabella) Jeff Branson and Eva Longoria in Visions. 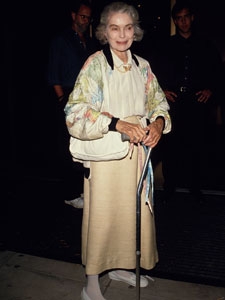 In this week’s “The Young and the Restless” Throwback Thursday Soaps.com takes readers back to June 1984 when Nikki Newman located Victor’s mother Cora Miller…

Nikki’s family is once again involved in one drama or the other. Years ago, Nikki wanted to bring peace to Victor and found his mother Cora (played by the late Dorothy McGuire). Both women were emotional upon meeting and Nikki couldn’t wait to bring her back to Genoa City to see Victor. Cora wondered if Victor really wanted to see her. Nikki admitted Victor didn’t know she was there or if Cora was even alive.

Cora was concerned about facing Victor and commented on how rich and famous he was. Nikki tried to reassure Cora, who refused to hurt Victor any more than she’d already had. “I’ll never be ready to meet my boy,” Cora insisted before begging Nikki to leave. Nikki refused to and was able to get Cora to open up about the past, how Victor’s father left them and finally convinced her to go to the ranch with her.

Do you remember what Cora was initially so worried about? Vote in our “Y&R” poll and feel free to discuss some of your favorite storylines in the comment section.

The Young And The Restless Spoiler Video: Real Killer

The Young And The Restless Spoiler Video: Forged