Happy 42nd Anniversary To The Young And The Restless

Changing times.
"The Young and the Restless" began as a half-hour serial and was lengthened to an hour in 1980.

Stuck on you.
Eric Braeden was offered the role of Victor Newman in 1980. The character was conceived as a villain who would be on for a run of eight to twelve weeks.

Daily updates.
Soaps.com did their first recap of "Y&R" on Friday August 4, 2006. Read more trivia and check out that recap when John Abbott was in jail through Happy 41st Anniversary To The Young and the Restless.

Get the scoop on ex-"As the World Turns'" Alexandra Chando in CW's Dead People and more in Soaps.com's Soap Opera Actors: Where Are They Now? 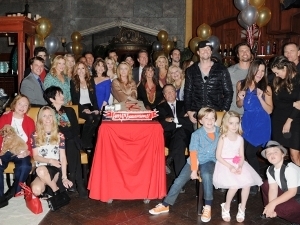 As “Y&R” celebrates 42 years on the air (the daytime drama debuted on March 26, 1973), Soaps.com shares some fun trivia from the CBS soap.

What’s in a name?
“Y&R” was created by Bill Bell under the working title, “The Innocent Years.” He later changed it to “The Young and the Restless” because it better reflected the youth and mood of the early seventies.

The replacement.
“The Young and the Restless” replaced the CBS soap opera “Where The Heart Is,” which had been canceled and last aired on March 23, 1973. Among the cast were James Mitchell, who later went on to play “All My Children’s” Palmer Cortlandt, Joseph Mascolo, who later played “Days of our Lives'” infamous Stefano DiMera and “The Bold and the Beautiful’s” Massimo Marone, as well as Rue McClanahan, who found fame on primetime television’s “Golden Girls.”

The Young And The Restless Spoiler Video: Your Choice