Book her!
Yet another calamity in Genoa City. This time, an agitated drunken Neil grabbed Nikki's steering wheel causing the vehicle to plow right into Christine... and nothing that happened after that made a lick of sense. Why would Neil not tell the whole story in his statement and risk letting Nikki be charged for something he did? It's reprehensible and not something a sober Neil, however aggrieved over the recent betrayal of his family members, would do. Why would Nikki cover for Neil? Is this the drinkers' version of the 'bro code'? Further, why would either of them cover up what really happened and tell Christine, who had just lost her baby, that she stepped out without looking? Not nice. Finally, why on earth would Paul ever jump to the conclusion that Nikki had targeted Christine on purpose? She wasn't the one who was jealous of Chris, it was the other way around! Nikki has absolutely no motive to want to do anything to Christine. She doesn't hate her and doesn't want Paul. Christine and Paul's pain over losing their baby was palpable and heartbreaking (so many fantastic scenes!), but the storyline is frustrating otherwise.

Bluffing.
Aside from Adam's laugh-out-loud crack that Billy wouldn't be able to figure out how to throw a toga party in a frathouse, the Adam/Chelsea/Sage/Billy storyline continued to be a bit of a snore - Adam argues with Sage, Adam tries to find ways to hang around Chelsea, Billy acts suspicious, rinse and repeat. Billy's proposal to Chelsea was exactly what she called it as - he senses correctly that Adam/Gabriel has loads more mojo than he does and could very well be a threat to his relationship. Nonetheless, he persuaded Chelsea to accept and they proceeded to share the news. Admirably, Adam managed to limit himself to insulting the fit of the ring, and Victoria faked being fine with the whole thing, which left Stitch feeling a tad deflated about his relationship and confiding in Ashley. Hmm.

Dirty affair.
The cabin kids storyline is taking a lot of criticism from viewers who are referring to it as the 'Scooby Doo' mystery or, with the appearance of the sinister lipsticked message, the 'I Know What Happened in the Cabin' mystery. While there have been some interesting twists, as mentioned in last week's Restless Rant, it's irritating that so much that pertains to the story happened off screen, and that it's all centered around Austin, who viewers weren't all that invested in. Makes you wonder who would have been interested enough in him to go to the trouble of killing him? Suspicions fell on Kyle for most of the week, though it would be surprising if Jack Abbott's son was brought back just to be revealed as a killer. Besides, he had no real motive. If he wanted Summer, he could just expose Austin's affair. The memorial was admittedly fun high-drama as Summer's memory returned in flashes and she realized Abby had slept with her husband and confronted her. Delish. The emotions running high were very well done. Summer's hysteria reached heights that some felt was over the top, but others thought was bang on. You could feel her sheer exhaustion later. Here's what's funny; the 'kids' keep returning to the scene of the crime, or they hang out at the one place you'd think they'd want to avoid - the police station. Abby confided in Victoria, but her flashbacks showed Austin being in love with her and her trying to end it with him, whereas she told Victoria she fell for Austin and he didn't feel the same way. Confusing? As for the mystery of who killed Austin, it's more up in the air than ever. Any theories? 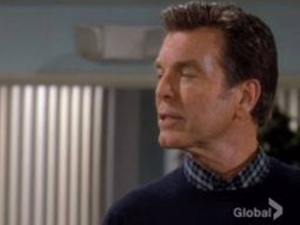 It still feels a bit like Genoa City has been relocated to the Twilight Zone or even the Bermuda Triangle, but the bright points in the plot-driven, gimmicky storylines have been the improved pace of the show and the outstanding performances by the exceptional “Y&R” actors. Thoughts:

What the hell are you doing?
It became pretty clear this week that we’re going down the doppelganger road with Jack. Fake Jack (Fack) was wearing a sweater and a bandage when he was confronted by Ashley in the hospital corridor, while the real Jack arrived home from the hospital wearing a grey suit and no bandage (definitely the real Jack as he knew who Adam was). As he did with Patty, it appears Victor has once again come up with a lookalike that’s such a dead-ringer for Jack, even his own sister Ashley didn’t realize he was an imposter when she was right up in his grill. Kelly, Jack’s ex-lover, also couldn’t tell the difference in the storeroom on Valentine’s Day. Sigh. Later, Victor and Jack, who had both left the hospital, inexplicably ended up back in the hospital chapel, where Victor was no doubt rendezvousing with Fack in the confessional. Jack probably would have come face-to-face with Fack when he opened the confessional door, but alas, Phyllis called and he left. Vote in Soaps.com’s Y&R Poll: Do you enjoy doppelganger storylines?

All on me.
The award for ‘most groan-worthy scenes of the week’ goes to the conversation at the Club where Nick spent what felt like an hour doing his Eeyore impression – “Woe is me. The collapse at The Underground is all on me.” – and Sage and Avery clucked sympathetically and reassured him at length that he wasn’t to blame. Thankfully Avery’s rather astonishing shade of pink lipstick provided an entertaining diversion, as did her very comical quizzical expressions when Sage and Nick shared a couple of inside jokes. “Silk panties?”

Adult tea party.
Well that was all kinds of awkward! Dylan clearly thought Sharon was hitting on him with the dinner and wine set up. You had to love his deer-in-the-headlights expression. Haha! In any case, the situation did a good job of making us feel Sharon’s loneliness. Methinks it would only take one more misunderstanding involving Joe for Dylan to go back to Sharon’s and stay for dessert.

Back off.
Christine raging at Phyllis was good fun, but having Phyllis find out from Christine that her daughter’s husband had died was a bit of a fail. More realistically, Phyllis would have been the first person Summer called given their relationship and her mother’s extensive experience with, well, thorny situations. Later, Christine went all hormonal again, this time over Nikki, which brings us to… 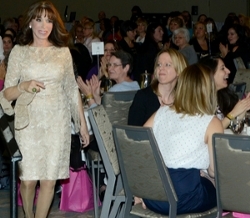