Mission accomplished.
The acting continues to rock in the Winters' storyline, but some of the plot points felt a little extreme. Neil went way over the top when he told Devon that he 'saved' them only because of Lily - he would have let the rest of them freeze to death. Say what?! He would have let people die over an affair, lying, and blackmail? I guess he would have deserved the same fate after sleeping with Malcolm's woman and getting her pregnant then? Just way too much. What about Lily going from zero to ending her marriage in sixty seconds over Cane not coming clean with her? More realistic would have been dialing him in on why 'protecting' her in that way was a bad call. Jill gave some good advice to Lily both at the crash site and later in her living room, and it looked like civility was restored between Lily and Cane by week's end. Finally, there was Hilary's big sacrifice. While her diatribe about finally having her revenge provided several eye-popping scenes and was an unexpected twist, as Neil said, it doesn't change what Devon did to him so she may have dumped him for nothing. Considering how long viewers waited for Devon and Hilary's secret to come out, it is daunting to think of months ahead of Hilary pretending not to love him now. Friday's episode ended with both of them crying. Vote in Soaps.com's Y&R Poll: Do you feel bad for Devon and Hilary?

Hiding something.
Between Billy's endless droning on about Bingham 'hiding something' and Sage's continual harping on Adam to be careful (when she's not), this storyline is seriously dragging. Sage chirped at Adam that staying at the Abbott home was a terrible idea because he or Jack might slip and give something away, and she then proceeded to tell Chelsea that 'Gabriel' has the hots for her before cocktails were even served. Yeesh. Can someone please just tell Billy that Gabriel is Adam so this can break wide open. Please!

Maybe he rode away on a purple unicorn.
I would wager that the storyline involving the 'cabin kids' (I use the term loosely considering poor Kevin has to be in his 30s) was the most fast-forwarded of the week. Considering this is all based around Summer, Austin, and a relationship between Abby and Austin that happened entirely off-screen, yeah, no one cares. Even though it didn't make any sense for Kevin and Mariah to be part of this group, thank goodness they were; Mariah's verbal assaults on Summer were arguably the only scenes worth watching. The mystery is vaguely interesting, but not enough to make it worth sitting through Summer's endless sniveling and hysterics. NuKyle showed up and found himself in the middle of all this, or did he? The jury's still out on how he fits into the whole mess. He's a real cutie, and definitely 'feels' like an Abbott, but it's stretching believability that this guy and Phyllis almost had a thing.

Looking ahead to next week.
Previews showed Christine really having a go at Phyllis! It's so out-of-line she'll probably have to recuse herself from the case. Fun! 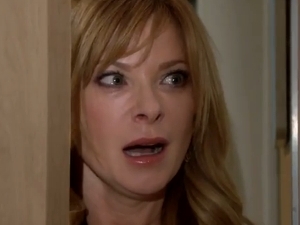 As the week kicked off things were still buzzing in and around Genoa City with the various disasters and their aftermaths, but there was definitely more fast-forward material as the week progressed. As mentioned in last week’s Restless Rant, the hectic pace set during sweeps was fun, but also left some with concerns about where the soap would be when the dust settled. Thoughts:

Jack facts.
Some were still wondering if this is “Y&R” or “The Twilight Zone” what with Jack claiming not to remember having sex with Kelly, and then later agreeing to be ‘frenemies’ with Victor. Since Ashley saw Jack and Kelly emerge from the storeroom adjusting their clothes, we have to assume it happened. That means either Jack was under the influence of a love potion so potent that it wiped out his memory of the incident, or he has a doppelganger running around all of the sudden (please no!). Though Phyllis versus Kelly is getting old, there was nothing better than Kelly’s face in the hospital room doorway when she overheard Jack calling her a pathological liar to Phyllis. Shaky shocked face! While Jack and Victor sparring verbally in the hospital room made for a bit of comic relief, the idea that Jack, after all his years of experience dealing with ruthless Victor, would take him at face value when he proposed that they try getting along is ludicrous. Jack would be intensely skeptical of his Mr. Nice Guy routine at the very least! Victor’s little trip to the hospital chapel’s confessional to update someone on the plan was both hilarious and ominous.

Pour me one too.
If you were surprised to see that Victor dug himself out of the debris and arrived home in a taxi in time for Nikki’s cocktail hour, you haven’t been watching “Y&R” long enough. Classic! Nikki’s kids were appalled to see her slugging back the vodka unapologetically and later confronted her on the subject, with Victoria realizing that Nikki was drunk when she nearly dropped Katie. Whoops! Does Dylan know about Nikki’s relapse yet? Hard to say since we didn’t see him since news broke that Jack was found. Perhaps he went home and got a beat-down from Avery, who, when we last saw her was waiting impatiently to read him the riot act over offering to lie for Sharon.

Wreckage.
With all the hand-wringing Lauren was doing over her sister Jill being in a plane wreck it was a little odd that we didn’t get a scene with her visiting Jill at the hospital. Even more odd, but somehow not surprising, everyone was concerned about telling Billy about Jack, but no one thought to tell him his mother had been in a plane crash, and no one has still told Jill that her son Billy nearly died in a fire. Gah!

The Young And The Restless Spoiler Video: For Real