Live with it.
Austin's new prickly attitude makes him a hair more interesting; they're probably setting up Summer and Austin's marriage to be on shaky ground when Kyle arrives. Speaking of Kyle, Austin accused Summer of hoping it was him who set up the mystery Valentine's Day party at the Abbott cabin, but it was actually Abby. Huh? This fell flat as there is no way Abby would invite Mariah and Kevin, and no way she would want to spend Valentine's Day in a cabin as opposed to a club. What about her and Harding? I would have much rather have seen that. On the plus side, Mariah adds spark to any gathering and the drinking game was fun until Austin ran off. Now we'll have to watch Princess Whinypants chase him through the forest or something. Gah.

There's that temper again.
As mentioned in last week's Restless Rant, Joe's agenda has been pretty transparent - he's doing a bang up job of getting to both Avery and Dylan and he's hardly had to lift a finger. Dylan punched Joe, and ended up having his hand iced by Sharon, who owed him one after the custody case. While Avery cleaned up Joe's face and recalled them slow dancing together, Dylan bonded with Sharon over their ability to ruin things. As boring as Dylan is, hooking him up with Sharon might be a fun diversion as she and Avery were rivals over Nick previously. It would certainly get Nick's attention, and Nikki would have a conniption over another man in her life falling for Sharon.

Silk panties.
Sage, who seems to be making a habit of being partially clad around Nick, was the woman with no shirt this time around. Nick was so enthralled by the sight of her in a bra that he failed to notice The Underground ceiling disintegrating into Victoria and Stitch's abandoned drinks. Uh oh. Vote in Soaps.com's Y&R Poll: Who should Nick be with?

Are you here to check out the placement?
Badda bing badda boom! The highlight of the week aside from Neil's performance on the private jet was arguably Adam answering his door shirtless. You could see Chelsea thinking, "Billy who?!" Anyway, this whole living across the hall thing just gets more convoluted. The reveal that Sage can't have children added a layer to her character, and changed up the Adam/Sage dynamic, however he later used the revelation to garner sympathy from Chelsea. It also added a complication in that Billy is now determined to keep Connor away from the couple across the hall so as not to upset Sage.

He's not gone, Daddy.
Billy's visit to the Delia roadside memorial with Adam watching, and Delia talking to Billy about forgiveness, was designed to move the storyline forward, but the 'feels' just aren't there with a different actor playing Billy. It left me wishing they would reveal someone other than Adam as the hit-and-run driver and move on altogether. 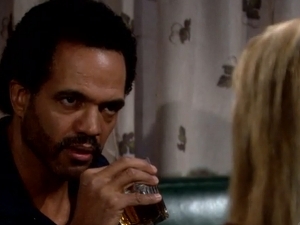 “Y&R” continued to ramp up this week. Sure there were still boring bits, mostly involving dialogue issues, and storyline tweaks that were a little suspect, but the bottom line is that for the first time in so long, there are things happening in Genoa City that are making viewers look forward to tuning in. Hello Neil Winters and shirtless Adam Newman! Thoughts:

No victim.
Phyllis’ story was invigorated this week by her realization that she didn’t do anything to Kelly and her renewed determination to prove it. Aligning herself with Victor also was a shot in the arm. There is no doubt that Phyllis understands that Victor is the one man powerful enough to get her out of the tight spot she’s in. While Victor coolly executed his plan, Jack was once again flip-flopping about what to do. Ack. What’s worrisome is that we’re probably supposed to be rooting for a Phyllis/Jack reunion out of all this. No thanks. Jack is too much of a fuddy duddy for Phyllis. Kelly and her Vivaldi were way more Jack’s speed. Here’s hoping that whatever happens next propels Phyllis into a more dynamic pairing down the road. As for Kelly, she finally began to show some cracks in the foundation, especially holding Avery at knifepoint. Avery may have told Jack that the plan is to make Phyllis look unhinged, but it’s likely she now realizes the truth about Kelly, so that plan could definitely change.

Be careful.
There is so much foreshadowing of something happening to Christine’s pregnancy due to her stress over Phyllis. It seems the writing’s on the wall.

Devil in disguise.
Oh what soapy deliciousness was Neil regaining his sight in time to see Hilary and Devon in bed together…and then pretending to still be blind! After, he toyed with them like a cat with mice as he let his anger, hurt, and resentment build to a rolling boil. As we watched Neil observe how Devon and Hilary behaved right under his nose, believing he couldn’t see them or their expressions, it really illustrated that, despite their protective intentions, they had become a little too comfortable with Neil’s inability to see, which for him added insult to injury as he felt played for a fool. More deliciousness ensued as Neil made his way to the local dive bar and ended up sharing a liquid therapy session with none other than the disgruntled Nikki Newman. Oh what joy when Neil confided to Nikki that he’d seen his wife in bed with his son (we didn’t see that coming!). Neil’s pain was palpable, however, when he leaned across the table and told Nikki he was worried people had been laughing at him. “I feel so betrayed here!” He then spoke of retribution, letting us know that Hevon will have to take their lumps before they can be happy. Later, as Nikki careened around town spouting off about Victor moving Phyllis in, Neil found himself boarding a private jet to Chicago with his family. What happened next was the most delicious of all – Neil rocked his captive audience by making his way to the bar, pouring a whiskey, reading the label, downing the whole glass (Lily’s jaw hit the floor!), and then revealing that he could see everything! There’s just nothing better than something blowing up this big. 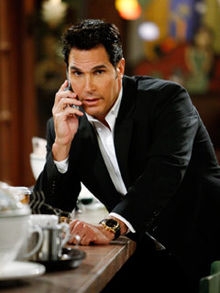