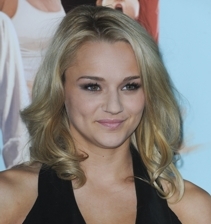 Actress Hunter King, who plays Genoa City’s Summer Newman on “The Young and the Restless,” is set to appear on CBS’ “CSI: Crime Scene Investigation.” King will play Lexi Nolan in the February 15 season finale episode entitled, “Under My Skin,” which features a final showdown between the CSIs and the Gig Harbor killer, whose motives are revealed, and in which Nick Stokes makes a decision that affects the team moving forward. Ex-“Days of our Lives'” actress Lisa Rinna (Billie Reed) also guest stars.

Hunter King also has a movie coming out in theaters on March 27, entitled, A Girl Like Her.

Get Cougar Town spoilers and more in Soaps.com’s Primetime Dish.

The Young And The Restless Poll: Valentine's Day Gifts