Blurring the lines.
What a cool twist to have Cane blackmail Colin over blackmailing Devon! How much more convoluted can the secrets and lies get within the Winters clan and their extended family? The answer is not much, which is why something had to give. After Hilary and Devon spent the better part of the week practically salivating at the idea of Neil regaining his sight so they could come clean, the news that Neil had been let go from the trial was a blow. They decided to give him a few days to recover, but Hilary, who has been nearing the end of her rope for weeks, nearly blurted it out. As they say, be careful what you wish for; Hevon's fervent hope that Neil would regain his vision came true - at the most soaptastically inopportune moment - just in time to witness them having sex. I think Neil will now pretend to still be blind and mess with them. As for Lily sensing something is up with Cane - yes, she knows her husband, and this makes sense. Oh, the what-not is really going to hit the fan...

Let it slip.
Ha! Could Joe be more transparent with his plan to come between Avery and Dylan? All he needed to do was get her to come to the room so he could then let Dylan know she'd been there, and the rest took care of itself. By week's end, Bluster Boy, aka Dylan, had settled down somewhat, but it won't take much to set him off again where Joe's concerned.

Princess Whinypants.
Sharon and Nick had their day in court over Faith, and it wasn't pretty. When it became clear from Mariah's testimony that Nick had not had sexual relations with the woman with no pants, Sharon saw the writing on the wall and sealed her fate with a giant freak-out. Nick, who was clearly on the fence about moving forward at one point, looked as unhappy as everyone else when he was awarded sole custody, yet he still didn't do anything to change the situation. He can be such a doofus. After the ruling and emotional parting of Sharon and Faith, Sharon completely turned on Mariah. Some were stunned by this reaction. The Sharon we know would never fault her older children for telling the truth under oath - it just seemed like it was written in so as to reset the conflict between Sharon and Mariah. Anyway, Nick later softened toward Sharon when she helped him comfort Faith after a nightmare. Hope for a thawing of relations was in the air. One of the most entertaining parts of the hearing was Sharon leaning heavily on Dylan for support and totally irking her past rival, Avery. Vote in Soaps.com's Y&R Poll: Should Sharon and Dylan get together? 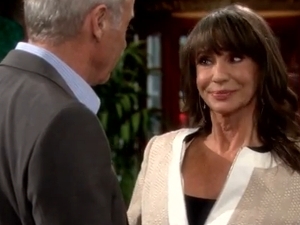 As mentioned in last week’s Restless Rant, there has been noticeable shifts and changes happening with the storylines and characters as the new EP and headwriter’s material comes into play. There is undeniably a new energy to the show, as well as a new sense of purpose, if you will; storylines have tightened up and characters are becoming more sharply defined. Positive change! That said, as the realignment takes place there have been a few instances where the characters’ actions have seemed out of whack, and there are other changes that will take some getting used to such as the scene transitions and the rather flamboyant background music in some scenes and montages that is enough to raise the hairs on the back of your neck. Thoughts:

Snap out of it.
So Phyllis went off to Fairview, much to the chagrin of Christine, who doubled-over in an agony of frustration. It will be no surprise if she gets herself so worked up over this that she loses the baby – especially when she finds out Phyllis has Victor’s backing, which makes her essentially Teflon. Anyway, the decision to have Phyllis assessed sent Jack into a paroxysm of guilt, particularly after Summer’s inane tantrum. Would she have been happier if they’d let her go to jail? Sigh. Nothing makes that kid happy… Over at Fairview, Phyllis’ alarm was palpable, but Victor’s words – from one badass to another – seemed to reach her. Victor ran into Jack on his way out, and in an unexpected moment set to some sappy music that refused to be ignored, Jack admitted to Victor that he was completely to blame. Believable?

Occasional relief.
It looks like Billy wants to have his cake and eat it too. While it was fun to see the leather-clad Stitch make Billy all pinched looking with the news he was moving in with Victoria, their conversation felt a bit like a cliche what with all the male-posturing. Billy spent the rest of the day sporting a black cloud over his head, which Chelsea quickly picked up on. The intensity of his indignation about Stitch moving in with Victoria and his kids caused him to put his foot in his mouth and sent her storming out. Who could blame her? Billy’s inability to completely move on from Victoria may well be what drives her into the arms of Adam/Gabriel.

Back where it belongs.
I got a teeny bit choked up when Jill and Cane finished signing and finally had Chancellor back. It never sat right that Victor had Katherine’s company. Say what you want about Jill, but she’s always loved Chancellor Industries. Victor’s total about-face was kind of intriguing – saying it’s what Katherine would want when he didn’t think that before. Hmm.

The Young And The Restless Spoiler Video: Happy?