Stop thief.
While the Victor/Ashley clashes have been great, it was a little odd to see Victor involved in such pedestrian activities as eavesdropping on the Jabot lab himself, and paying off someone at the Environmental Security Bureau to bust Ashley and bring him her fragrance. This all reeked a little too much of desperation for Victor Newman. As for Victoria backing up his lie and then changing her mind and cutting him out of her life for the zillionth time - way to make her seem incompetent. Why? Of course Victoria's ultimatum resulted in Victor returning Ashley's formula...but he kept a drop to analyze.

Katie's christening.
This was definitely one of the more dull gatherings I've seen on "Y&R" despite Victor showing up and having words with a few peeps. Chelsea saying she had deja vu was cute though. Jill should have been there - writing her as showing up at the ranch later saying she had a cold was weak.

Baby blooper.
Anyone with two IQ points and a bit of life experience could have deduced that Nikki was smashed at the christening - especially afterward at Victoria's house with the dozing, slurring, and stumbling. But no, when Nikki almost dropped Katie, they all believed it was her MS. Back at the ranch, Victor was quick to act on his concerns about causing her stress and assured Nikki he would stop the development deal so Dylan didn't lose Crimson Lights. Love it when that side of him comes out to balance the dark side.

Full price.
So Colin blackmailed Devon into giving him part of the money to buy Chancellor and Cane was pretty suspicious. What happens now that Jill needs the rest of the money immediately is anyone's guess. Will Colin finally pressure Devon too much?

Talk to me.
Give Neil back his eyesight stat because we can't take another day of him going on and on about his great life with Hilary or another scene of him staring off into the distance acting clueless while Hilary's crying and having hush-hush pow-wows with Devon. Ack.

Bucket list.
Michael and Lauren talking about a bucket list was poignant, but Michael has a point about everyone making every conversation about his cancer. His candidness is refreshing. 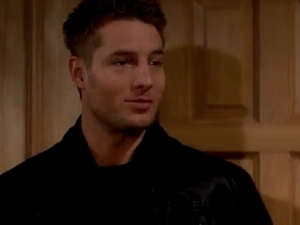 Some are complaining that “Y&R” has been boring again. There has been a lull, but there were also some noticeable shifts and changes happening in the storylines as the new headwriter’s material began airing this week. Thoughts:

The lady with no pants.
Sharon and Nick building a custody war around an incident in which Sage spilled hot chocolate on her slacks is just lame. Aside from the possibility of seeing witchy little Faith doing her dirty work on the stand (as mentioned in last week’s Y&R Restless Rant, Faith’s antics are laugh out loud fun), there’s no real interest in this unnecessary custody trial. Maybe Nick will call it off since it’s causing Nikki stress.

Won’t you be my neighbor?
Having Adam come back as ‘Gabriel’ with the added complication of being married to Sage seemed clever, and it was interesting to see the predicament it put Jack in, but now it’s feeling tired and he’s coming across like a bit of a creeper; moving in across the hall from Chelsea and trying so obviously to chat her up at every opportunity when he supposedly has a girlfriend/wife. It’s not good. Also, why isn’t Adam losing his temper more behind closed doors over Billy pawing Chelsea and acting as a father to Connor? Adam’s gotta’ keep cool in public, but he’s a pretty volatile guy so what’s up? Bottom line: many just want Adam to be Adam again. Vote in Soaps.com’s Y&R Poll: Should Adam’s identity be exposed?

One night.
Clearly Joe thinks he’s made progress with Avery after luring her to his suite. I’d have to say he definitely got inside her head and that’s why she is making excuses to go back. If only we cared one way or the other.

Nail her.
While we can understand logically why Christine has a ‘hate on’ for Phyllis, it doesn’t mean she irks us any less. So Phyllis is now under arrest and blames Jack, who brought her back to the house knowing what would happen. That was a twist (love that I didn’t see it coming!), but of course Jack thinks he can help Phyllis beat the rap by putting the blame on Victor. Hmm. As for Kelly, she’s definitely a full-blown psycho if she set Phyllis up and is willing to let her be shipped off to prison for life just to clear the way with Jack. Yike.

The Young And The Restless Spoiler Video: Move In

The Young And The Restless Saturday Teaser Poll: Comfort