Tacky tackhouse.
As predicted, there is little doubt that Nick's inability to resist a new woman is going to come back and bite him in court. He was upset about Sharon coming by because it was 'his night with Faith', yet Faith was upstairs while he looked through old yearbooks with Sage. Meanwhile, the 'apple doesn't fall far from the tree' adage applies for Faith, who is already as conniving as her Grandpa Victor has ever been. When Sage wound up in Nick's robe, Faith knew exactly what she needed to do and she did it. Yes she's a brat, but that was laugh out loud fun. Later, Faith told Sharon that daddy told the woman to take off her clothes - priceless! Between Faith's manipulations and Chelsea coaching Sharon, methinks Nick is going to be very sorry he insisted on pursuing this custody case. As mentioned in last week's Y&R Restless Rant, he isn't leaving Sharon much choice but to fight back.

Time for a new deal.
Devon should have called Colin's bluff. Just saying. As for Hilary and Devon canoodling in Chicago and almost getting caught by Lily, and Neil almost going to surprise Hilary - this stuff is getting old. Whether Neil gets his eyesight back and realizes what's going on, or Hilary snaps and confesses (she seemed on the verge of it twice this week), something has got to give. That said, this has been built up to the point of exploding. When you factor in Colin's blackmail, the upshot is that the entire Winters' clan and extended family will blow sky high when all is revealed. Everyone will be pissed at everyone. Gah.

Kick me when I'm down.
Fen being opinionated about Austin, and Summer taking it out on Mariah...ack...just not very into Summer's drama at all. Austin chastising Summer for her behavior slightly piqued the interest, but the best part in all of this was Mariah seeking out Kevin for comfort and him knowing she needed to be held without a single word spoken. 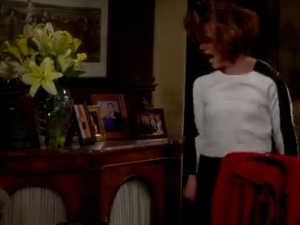 It was a steady week on “Y&R,” with a few storylines needing to move forward. Thoughts:

I am not amused.
Phyllis and Kelly’s rivalry continued to escalate, and after the tea poisoning it is becoming clearer that Kelly is the mastermind who is using Phyllis’ past history against her. Not only does Kelly have Jack suspecting Phyllis is behind these incidents, but she’s so good she has Phyllis herself thinking she might have done these things and blocked them out! When you consider it, it’s just a little too convenient how there is always evidence readily available to back up Kelly’s version of events – the florist’s business card, the wig, the leftover tea – also she didn’t want the police to investigate her poisoning. Hmm. Phyllis’ ferocity has been the highlight of this storyline, especially in contrast to the mewling Kelly. Here’s hoping that if Kelly is exposed for going to these lengths to try and get rid of Phyllis, she goes completely haywire and confesses to being Delia’s hit-and-run driver as well.

Dada.
While it was awesome to see Adam get to hold Connor and spend a bit of alone time with him, it really is weird for Adam to keep popping up wherever Chelsea is and trying to hold deep conversations with her. So as much as it’s getting really old hearing Billy complain about ‘Bingham’ always being around, it’s not without merit. I feel like so much more should be happening with Adam; something new needs to develop to keep things interesting. It should start with him taking his shirt off. You’re welcome.

The vultures are circling.
I had to wonder why Victoria was so quick to defend Victor and insist he had nothing to do with the intimidation campaign against Dylan considering what he’s done to her in the past. Things that make you go hmm. There was no issue with her plan to bring back Brash & Sassy though – love this idea! It’s so good to see the business competition heating up again.

The Young And The Restless Spoiler Video: Lunatic

The Young And The Restless Saturday Teaser Poll: Truth