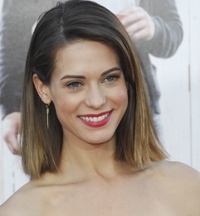 Actress Lyndsy Fonseca, who formerly played Genoa City’s Colleen Carlton on “The Young and the Restless,” has joined the cast of ABC’s upcoming new series, Marvel’s “Agent Carter,” according to Marvel’s website. The series is set in 1946 in post-war New York and surrounds the story of Peggy Carter (Hayley Atwell), who balances administrative work with going on secret missions for the SSR (Strategic Scientific Reserve). Fonseca will play Peggy’s friend, Angie Martinelli. The series is set to debut in 2015.

Since leaving “Y&R” in 2005, Lyndsy Fonseca has had roles on television’s “Desperate Housewives,” “Nikita,” “How I Met Your Mother,” and in several films including “Hot Tub Time Machine.”

Watch a Justin Hartley as Y&R’s Adam promo video, and then find out when to see Y&R stars on The Queen Latifah Show.