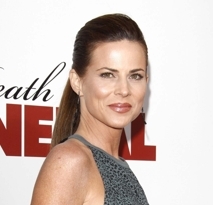 Actress Julianne Morris Polaha is reprising her role of Genoa City’s Amy Wilson, according to a report by Soap Opera Digest. Morris Polaha will turn up some time in November after being absent from “The Young and the Restless” for eighteen years. Amy was Sharon’s (Sharon Case) former best friend, who dated Nick (Josh Morrow) before he fell for Sharon. She also was the person who shot Matt Clark (Eddie Cibrian). When she remembered having shot him, the information freed Nick, who was in jail for the crime.

Since leaving “Y&R,” Julianne Morris Polaha has had roles on “Baywatch Nights,” “The Adventures of Sinbad,” “Days of our Lives,” and appeared in the television movie, “Another Pretty Face.”

Vote in Soaps.com’s Throwback Thursday Y&R Poll: Nikki Reunites Victor’s Family, and then get Arrow spoilers and more in our Primetime Dish.