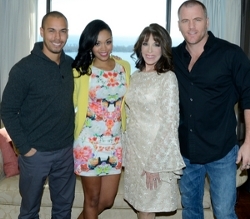 The 3rd Annual Opportuniteas for Independence High Tea in Toronto, held in December 2014 raised $75,000 for March of Dimes Canada. Kate Linder’s 2nd Annual Calgary Tea is coming up in April.

“The Young and the Restless'” Kate Linder, who plays Genoa City’s Esther Valentine, is set to host her third annual Opportuniteas for Independence High Tea in Toronto on December 7. High tea will be held at the Westin Harbour Castle, 1 Harbour Square, from 2:00 PM – 4:00 PM, followed by autographs with the “Y&R” cast. Sean Carrigan (Ben) will emcee the event, which benefits March of Dimes Canada’s Conductive Education program, along with Global Toronto’s Leslie Roberts. Also attending from “Y&R” will be Bryton James (Devon), Mishael Morgan (Hilary), and the show’s hair and make-up experts, George Guzman and Patti Denney.

Read about Sally Kellerman to Y&R as Constance, and then get Reign spoilers, and more in Soaps.com’s Primetime Dish.