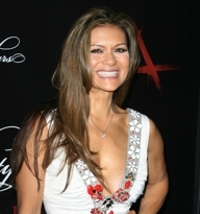 Nia Peeples, who once played Genoa City’s Karen Taylor on “The Young and the Restless,” is currently taping the new SyFy movie, “Lavalantua” in Los Angeles. The movie is about huge spiders that erupt from volcanoes in the Santa Monica mountains. These eight-legged monstrosities can spew fire and try to destroy the city of Los Angeles. Peeples, who plays Pam on “Pretty Little Liars,” and who also appeared on daytime’s “General Hospital” as Carla Escobar, co-stars in the new sci-fi drama film with Steve Guttenberg, Leslie Easterbrook, and Mike Winslow, all of whom previously appeared in the infamous “Police Academy” movies.

“Lavalantua” is slated to be broadcast in Summer 2015. Watch this spot on Soaps.com for updated information as it becomes available.

Watch a promo video of Scott Elrod as Y&R’s Joe Clark, and then check out the Y&R Weekly Actor Tweets to find out where to get Burgess Jenkins’ movie, “Hero,” on DVD and more.

The Young And The Restless Spoiler Video: Chris' Question

The Young And The Restless Poll: How Long Have You Watched?