Soaps.com Chats with Young and the Restless’s Christel Khalil!

Soaps.com: What is your perspective on Lily and Cane, and the most recent hurdle to their being together - him going after custody of Cordelia?

Christel: I think that Lily is really supportive of Cane, you know, she already told Cane how she feels about it - that she doesn't agree with it - but because he's so adamant about doing it, she's not going to leave him or do anything like that. So, she's still really supportive of him; whatever he wants to do she'll support him, while letting him know she doesn't agree with it.

Soaps.com: Does Lily's background come into play with her not wanting to take a child from it's mother?

Christel: Yes, It makes her think about her and her mother, and how she would feel if she had been taken away from her mom - and she doesn't have her mom with her anymore, so she doesn't want to take that away from anyone else. She sees that Chloe really does love the baby, so that's where she's coming from.

Soaps.com: What is it like acting out the rivalry with Liz Hendrickson as Chloe?

Christel: Oh, I love working with her! She's such a great little actress, and she's fun. We hang out a lot outside of work, and we just have a great time together!

Soaps.com: What about Lily and Billy - the couple had just begun to develop a fanbase and then it was over - do you think there is any chance it will be revisited?

Christel: Who knows? Anything can happen, but I'm sure if they did get back together it would be pretty far in the future.

Soaps.com: Of Lily's past three relationships - Daniel, Cane, and Billy, which do you see as the best match for Lily, and why?

Christel: I think Lily is at a different point in her life than she was when she was with Daniel, so as of right now I think that Cane is the best match. She's been hurt so much, and I think Billy could be the kind of person that could hurt Lily again.

Soaps.com readers. don't miss Part II of this great chat with Christel, or miss our Getting to Know Christel feature, in which she answers questions from the Soaps.com message board posters! 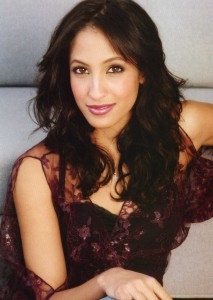 Soaps.com recently had the chance to speak with Christel Khalil, the actress who portrays one of Daytime’s most popular romantic heroines – Lily Winters on The Young and the Restless. Christel was great to chat with, and every bit as friendly as her alter-ego. Check it out:

Soaps.com: How did you get into acting and what have you done besides Y&R?

Christel: Well, I have three older brothers and my mom put them in acting, doing extra work and things like that, and taking acting classes. So when I was about five my mom decided to put me in it to see how I would like it, and I ended up just loving it, and taking to it. I’ve been doing it ever since – started out doing small things and worked my way up from there.

Soaps.com: What would you have done if you hadn’t pursued a career in acting?

Christel: (laughs) Oh man, I don’t know. When you’ve done something your whole life, you can’t imagine doing anything else. I think I would have to be part of the entertainment industry in some way – if not acting, then maybe dancing or singing. I really can’t think of anything else I would do!

Soaps.com: What are your hobbies and interests outside of work?

Soaps.com: You are a still a newlywed, so congratulations! How is married life, and how do you and your husband (Stephen Hensley) juggle two busy careers?

Christel: Married life is great! I love it – it’s an amazing thing – you’re with your best friend for your entire life, just hanging out and doing things you both love to do. Thankfully, both of our schedules are very random, so it’s good in a way – there may be a day or a couple of days where we can’t see each other very much, but then we’ll have maybe three days where we can see each other all the time – it all works out in a good way!

Soaps.com: Do you have any other projects coming up outside of Y&R?

Christel: Not yet. I’m finally getting back into auditioning, so, hopefully, soon, there will be something coming up. I’m auditioning for both Primetime television and movies.

Soaps.com: What are the similarities and/or differences between Christel and Lily?

Christel: I feel like Lily is a little bit more naive than I am, and kind of like a hopeless romantic, and just always expecting the good out of people – which I do too – but I have a little bit more skepticism than Lily does – so I guess we differ in that way.