Interview: The Young And The Restless’ Michael Muhney 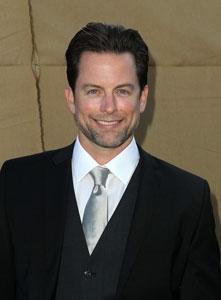 “It is a very lonely job playing Adam Newman.”

That might be the understatement of the year. For nearly five years now, actor Michael Muhney has had to portray a character with few friends and many enemies on “Y&R.” He has tackled some serious storylines during his time in Genoa City, and Muhney has always delivered a nuanced performance that refuses to pigeonhole Adam as an all-bad guy.

But an actor can only take so much, and the current storyline regarding Delia’s (Sophie Pollono) death and Connor’s (Brady and Cooper Friedman) eyesight has been hard for the loving father. Muhney took the time to share with Soaps.com how emotionally difficult it has been to tackle Adam’s current issues, and why no one should jump to any conclusions.

Soaps.com: How did you feel when you first read the script regarding Delia’s death?

Muhney: When I was first told about this story, I knew I would face some of the hardest acting challenges of my 16 year career. I have three children, and my only daughter, Ella, is just about Delia’s age. I knew this storyline would hit very close to home for me, and I knew that each and every scene, each and every episode, would take quite an emotional toll on me.

When I was told about this storyline I knew I was in for something very painful, and very powerful, and I decided, right then and there, that I would commit 100 percent through it all, and I trusted that the audience would come along with me for this painful journey about loss, fear, hope, and growth.

Soaps.com: You are very open on Twitter about your love for your children. How do you tap into that when tackling a storyline like this? Has the storyline affected your real life?

Muhney: If anything, I’m just so thankful that I have three little munchkins to come home to every day. I’ve been soaking up extra hugs from all of them for a few months now. In regards to tapping into that emotional well… as a parent I have found it substantially painful, even traumatizing, to go to those dark places that have been essential to have Adam truly empathize and feel that pain that was necessary. I know I’ll be a stronger actor when I come out from this on the other side, but it has put a lot of mileage on me, emotionally speaking, in order to get where I need to be so that I can deliver a powerful, painful, honest performance for the audience.

Soaps.com: Adam burning the scarf seemed like a definitive decision. Is there any going back from that?

Muhney: Adam realizes that although he felt nothing, heard nothing, and saw nothing while he was driving, this scarf must be incriminating. But could it have just been caught up in his wheel because it was lying in the street? Did Adam do this? How could it be? Because as far as Adam experienced, there was no “hit” and obviously there was no “run.” And once he starts to put the pieces together later, his amazing capacity for guilt starts to take over, and at some point, he emotionally accepts the idea that he was possibly, and probably, the one to hit Delia.

Now we all know Adam is incredibly intelligent, and he’s definitely smart enough to know that things aren’t always as they seem, and there could certainly be another driver out there who hit this little girl, but his guilt and his conscience are eating him up alive, and then reason sets in: If he turns himself in, will that bring her back? How can he be certain that it was him? What if he turns himself in and was wrong?

If he were to turn himself in would anyone in town believe that he had no idea he hit anything, and did not flee the scene of a crime because he had no idea a crime had been committed?

If he turns himself in, he will most likely spend over a decade in jail and be ripped out of his son’s life, a dilemma that he vowed to his son never to be in. Adam grew up without his father. He lost his stepfather at a very early age. He had to deal with many things throughout his childhood, all on his own, without a man in his life. Very painful things, happy things, and everything in between. And he lives with the painful truth that his father could have been there, in his life, but he chose not to be. His father chose to go along with some sick, warped plan that would keep him out of his life. And Adam does not want to repeat history, deny his son a father while growing up.

At the very core of who Adam is, and assessing how damaged he is from a father who made a choice not to be his father, Adam feels he cannot live with himself if he, too, makes a choice to take himself out of his son’s life, and open up his child to a lifetime of pain, self-doubt, inadequacy, and abandonment like Victor (Eric Braeden) inflicted upon him.

Soaps.com: Is there redemption for Adam?

Muhney: This is a humanizing, albeit agonizing, journey Adam is going on with the audience. Self-discovery, empathy, remorse of a life that could have been lived in a far better way. The journey isn't over, and each viewer will have their own personal feelings about all of it. It is not for me to say how the viewers will feel about Adam when this is all over. That is a responsibility that the viewers themselves will have to accept, and I trust they will do it with open eyes, as they see the entire story unfold. But this is a television show, and more importantly this is a drama, so things cannot be handled without friction. There has to be some turbulence on this flight, but what happens in the end is something for everyone to decide for on their own. Unfortunately, in real life, people are so incredibly quick to judge a situation before it has completely played itself out. But fortunately, in "reel" life, the audience gets an opportunity to watch things unfold, or unravel... or both in some cases.

And this word "redemption," what is it about this word? Is it tangible? Do you know when it has happened? Is it necessary in a drama? Does it make a character boring? Does everyone agree on a character being "redeemed?" Or is it a word that is so subjective and polarizing and insignificant in modern television? It is a word that has been given, quite possibly, far too much significance, when it is truly ambiguous and meaningless in a drama. I have personally grown to loathe that word in literature. I much prefer to watch actors and writers create "humanizing" moments for characters. In a drama, "humanizing" is far more impactful and powerful than "redeeming."

Soaps.com: Is a small part of Adam glad because it saved Connor's eyesight?

Muhney: Not at all. Adam would have found any other way to save his baby's sight. This was far too tragic, and personal, and horrific, to ever cause Adam to be glad about any of this.

Soaps.com: How has it been on set working with everyone on these scenes? Any issues that have affected off-stage life?

Muhney: It is very difficult playing Adam Newman. I have spent 4 1/2 years portraying a character that has been consistently berated, challenged, alienated, demonized and ostracized by most of the characters. You find yourself in such a weakened, vulnerable emotional position that you feel the slightest change in the weather could make you break down and cry or you could snap at any given moment. To play Adam Newman as long and as consistently as I have, it becomes an exercise in controlled lunacy, as far as my nerves are concerned. It is a very lonely job playing Adam Newman. Playing Adam Newman, if anyone has any kind of grasp of literature, performance, and storytelling, is both an actor's dream, and an actor's nightmare.

Soaps.com: Is there a chance for Adam and Chelsea (Melissa Claire Egan)?

Muhney: There are many chances for many things, stay tuned...

On a personal note, I'd like to thank you for the opportunity to do this interview. And I would like to thank the viewers, the fans, for being so incredibly supportive of my craft, and my hard work. The overwhelming outpouring has been quite humbling. I'm honored to know that I touch so many people with my performances. Thank you all so very much.

Get to know Wyatt from "B&B" with Soaps.com's Interview with Darin Brooks. Then find out more about Sean Carrigan's stint on Modern Family.