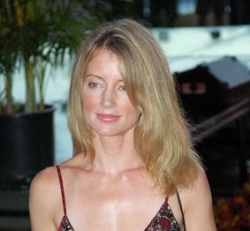 A first look photo has been released showing Kelly (Cynthia Watros), who is a school teacher whose son was hit and killed by a car, interacting with Genoa City’s Billy (Billy Miller). They meet at a support group for parents. Please visit Entertainment Weekly to check it out.

Actress Cynthia Watros (“Lost,” ex-Victoria, “Another World,” ex-Annie, “Guiding Light”) has been hired for a role on “The Young and the Restless,” according to a report by Entertainment Weekly. Watros, who has already started taping scenes, will be playing the non-contract role of Kelly. This character will figure into the lives of Billy (Billy Miller), Victoria (Amelia Heinle), and Chloe (Liz Hendrickson). She will debut on screen sometime in the month of November. Watros recently wrapped on a drama called, “Blood and Circumstance,” and appeared in the TV movie, “Retribution.” She has also played guest roles in TV series such as “Grey’s Anatomy,” and “Hawaii Five-O.”

What is your opinion on this casting news? Let Soaps.com know by voting below:

Fun! Check out The Young And The Restless Weekly Actor Tweets. Find out who will butt heads with DOOL's Stefano.

The Young And The Restless' Sean...