My new blog on Malibu Farm Restaurant is up. Thanks @Susan_Burger !! Check it out. http://t.co/U815HyU2Qh

I love u! Youre the best! so much fun!!!RT @HunterHaleyKing: Love working with @MelissaOrdway ... Got to spend the whole day with my friend❤

Hard to believe 9/11 was 12 years ago. Innocence was lost. God bless the victims and their loved ones. #NEVERFORGET911

So @JoeyKingActress sends me random pictures of me throughout the day that she secretly takes.... She's a creep pic.twitter.com/anOIvotX40

I'm too sad to wear my hat

While just out to dinner, I had a dream-come-true convo w/Gary Oldman (the man who inspired me to act professionally) about acting. #wow

PLEASE WATCH THIS VIDEO AND SPREAD THE WORD, THANKS http://t.co/lDbSkuxZ6A #PUTTHEPHONEDOWNANDDRIVE

If u love to watch @AdamNewmanYR every day, and if u love drama & powerful storytelling...then sit back & enjoy the rest of 2013. #TRUSTme

I'm not made of money, but I'm made of Muhney...and that's basically the same thing. Goodnight.

Catch up with this week’s Venice The Series recap with "Y&R’s" Christian LeBlanc.

Follow Soaps.com on Twitter @soapoperafan and Soaps.com on Facebook. Tweet and Facebook with us about "The Young And The Restless" and all the Daytime soap operas as well as "Dallas," "Glee," "Grey’s Anatomy," "Pretty Little Liars," "Revenge," "Vampire Diaries," and "Venice The Series."

Ever wonder what your favorite stars from “The Young And The Restless” are up to when they aren’t filming the show? Soaps.com compiled all of our favorite tweets from the past week in GC to give you a peek into what they get into behind the scenes.

I'm gonna tweet my location outside the stadium this Saturday in College Station, TX so anybody can find me before the game to take a pic!

hey!! thanks 4 the mentions! we r lucky 2 work w u2! yesterdays scenes & some we shot last week..!! @JoshuaMorrowYR

Have they shown the reading of the will yet?

From my photo shoot today! New promo for #thestaffordproject thank you @JoshuaShultz pic.twitter.com/6r1xfF4qs7

I have personal friends who lost a son during the collapse of the towers! I often think of them & families who were so tragically affected!

our show has such a good story coming for you…..on fire, trust me….some of your faves droppin talent all over the place….trust me 🙂

“@CoralTwining: @gregrikaart Which do you prefer: boxers, briefs, or boxer briefs?” I prefer swimmers, wearing briefs.

No matter who you are, where you come from, what you believe.. You are not alone. Spread the love. #SuicidePreventionWeek 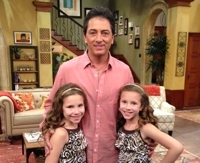