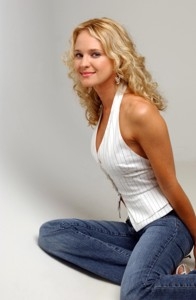 Soaps.com was thrilled to get the opportunity to speak with Y&R’s Sharon Case at length. Our very enjoyable chat resulted in enough Q&A’s for a four part series! Soaps.com readers, thank you for contributing. Don’t miss Part I on our sister site, Soap Opera Fan Blog !

Soaps.com: As Sharon, you’ve had a lot of really intense scenes [on Y&R] lately.

Soaps.com: There is a couple that I want to ask you about. First, the scenes where Sharon has finally had it with Jack’s lies, and she snaps, and physically pushes him away. Great job on those scenes, Sharon – very realistic! Are scenes like that therapeutic?

Sharon: Thank you! Well, it’s not necessarily therapeutic for me. The only therapy in it for me, and I think any actor will say the same thing, is when you come to work, and you’ve planned what you’re going to do with your scenes, and you really hit the mark! Just because you did it, and you did it the way you wanted to, and you feel satisfied with what you did – and there’s nothing more joyful than that. That is therapeutic! When people come up to you and say that they really liked the scene it validates that you really hit your mark that day. Actors love to get compliments because of that reason – it feels good!

Soaps.com: Frustrated viewers finally got to see Sharon say the things to Jack that they’d been yelling at their television sets for weeks!

Sharon: Well, Maria Arena Bell is amazing! Hopefully, that won’t change! We’ve been through so much change! I loved having Jack Smith write the show, it was a crying shame that they let him go, then we went through a bunch of ‘crazy’ for a few years, ever since Jack Smith left, now we’ve finally stabilized – we have a fabulous writer in Maria. Let’s not rock the boat again!

Soaps.com: Some feel that Maria Arena Bell has brought it back to the way Bill Bell used to write the show.

Soaps.com: The other scenes that I wanted to ask you about were the emotional scenes in the cabin, where you are writing the letter to Nick and breakdown at points. You did a really good job – it was like intruding on a woman’s private pain and inner turmoil, as opposed to watching an actress.

Sharon: Thank you so much for saying that. I really appreciate it.

Soaps.com: Thank you! So, how do you prepare for those types of scenes and make it so realistic? How do you make the tears come?

Sharon: For every scene it’s a little bit different – it depends on the storyline. You try to relate it to something in your real life, and sometimes the way the story is there is definitely something you can relate it to in your life, but sometimes there’s not! Like when I had to be crying and scared, standing over Cameron Kirsten’s [Linden Ashby] dead body – I don’t have anything in real life to relate that to! So, that’s harder to do, and harder for me to prepare, but you just try to come up with something that is as close as possible. For my own inner work, for the scenes in the cabin, I just tried to find something in my own life that has happened to me, that’s as close as possible to what’s happening to Sharon. Those scenes in the cabin were so sad anyway – when I read them in the script, it brought tears to my eyes just reading it, without even acting it! So, this wasn’t a real stretch, or really difficult to get sad over.

Soaps.com: Sharon also gets some pretty good one-liners in - especially in scenes with Phyllis. Do you ever get to ad-lib, or do you follow the script?

Sharon: I do a little bit of both. I don't ad-lib a lot, but definitely do sometimes. There have certainly been some great lines written for me with Phyllis lately, which has been fun. I shot a scene the other day [which won't air for about a month] where I really give it to Phyllis. In fact, I'm so angry, I think it's probably the most angry I've ever been to Phyllis! On parallel with how Sharon was with Jack in the scene that you mentioned.

Soaps.com: How is it working with Michelle Stafford when you are friends in real life?

Sharon: We are friends, yes! We don't pal around outside of work or anything, but nor do I with anybody in the cast. We are now working together a lot, so we are definitely friendly - I really like working with her a lot. There are many people I've worked with in the cast, and I do have my favorites. Along time ago, always my favorite actor to work with was Eric Braeden. What makes someone your favorite to work with has nothing to do with how well you know them, or how friendly you are with them, or what you like about that person; it has to do with what actor you gel with on stage, where that actor manages to evoke real responses from you. For years and years, that was Eric Braeden.

Soaps.com: Can you give us some perspective on how Sharon views her relationship with Victor?

Sharon: She thinks of Victor, in a way like a father figure, but not quite. When she was younger she saw him as that, and then when she grew up she saw him less as a father and more like a hero. Sharon acknowledges that he does bad things; Sharon acknowledges that everybody does bad things, but it doesn't make them bad people - including her! She's grown up as a part of the Newman family and Victor was always her protector. No matter how bad of a guy he was on the outside, Victor always protected her. Sharon loves to have that security blanket feeling that somebody's going to catch her - somebody out there is going to catch her if she ever falls - and that's Victor.

Soaps.com: Getting back to Sharon and Phyllis, would you ever want to see them on the same side - or do you prefer the conflict?

Sharon: Oh, no, I prefer the conflict! Oh my gosh, you don’t have enough enemies on the show [laughs], well, I never do, I don't want to get rid of the ones I have! One of my favorite relationships on the show that was a friction, or enemy, storyline was the one that I had with Melody Thomas Scott [Nikki Newman]. Sharon and Phyllis are obviously enemies, and she also had Grace [Jennifer Gaeris], but my favorite by far is Melody! I love the daughter-in-law storyline where the mother-in-law hates her. It's this interesting love/hate relationship that is just my favorite conflict storyline to play.

Soap.com: What is it like trying to play a rivalry or conflict storyline like that, when you are friendly with the people in real life?

Sharon: It's so much easier to play conflict when you're friendly with someone. You would think it would be the opposite, but it's not. In real life, in order to be really angry with someone, usually, you have to know them [it stings more when it is someone you care about]. You can be hurt more by people you care about. So, if you are friendly with the actor who is playing the conflict storyline with you, it helps you get to the place you need to be better than working with a stranger, or somebody you just don't know that well.

The Young and the Restless Video...