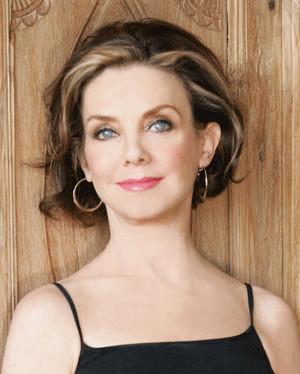 Ask any fan of The Young and the Restless what they think of Gloria Bardwell (Judith Chapman), and they will most certainly tell you one of two things. They either love her, or they love to hate her! Either way, their deep rooted emotions around Gloria are a direct result of the powerful performance that her portrayer (Chapman) delivers in every scene! I’ve had the pleasure of meeting the fabulous Judith Chapman at previous Emmy Awards Events and immediately put her on the ‘must have’ list for interviews with Soaps.com. I’m happy to say that the wait is over! Judith took a quick break from her latest project (a new play) and recently called me from her home in Palm Springs to chat a bit.

Soaps.com: What can you tell me about the latest play that you are working on?

Judith: Last year we did a play called “The Trial of the Catonsville 9” and I had everyone come down to Palm Springs. Well, there’s a Theatre that I am involved with, (I’m a company member) a very exciting new theatre company doing only original work. I offered and thought, why can’t “The Troubadours of Daytime” (a nickname that Judith came up with for the group) do something and have it be a fundraiser for the theatre. So, I’m putting something together now and working on the play, but it needs some trimming down and some editing. It was actually written by a former writer of “The Young and the Restless” (Jim Inman) and was presented to me last year (after “The Trial of the Catonsville 9”) by John Conboy (original producer of Y&R). John’s been a good friend for many years and it evolved, you know this circular thing of using actors from “The Young and the Restless”, a play written by a former writer from Y&R and a former producer from Y&R. Last year was a much larger cast, this will be just four of us and it would be very soon. Last year I had 6 months to prepare and get it on and it was wonderful. People came from all over the country and we raised money for Kiva. And for all the people that did come so far to see the play, we are still making loans through KIVA! They make micro-loans to people around the world, so we’ve opened lots of bakeries, bought cows in god knows where, and pigs in Cambodia…really helping people. And the loans are repaid, so it truly is a gift that keeps on giving! As the bank diminishes, the people pay the loans and we’re able to make more loans. This one however, would be a fundraiser for the theater, and in these challenging times, asking people to give funds to support a theatre (a fledgling theatre, as good as it is) would be a challenge. The LA Times is calling it the best new theatre to come down the pike in years, and quite frankly it is. So, I thought that maybe the Troubadours of daytime could help out a little bit.

Soaps.com: Well, Daytime does have the most loyal of fans and they will surely come out to see you guys.

Judith: Absolutely they are! So, that’s what I’ve been working on and the time keeps getting away from me.

Soaps.com: I have to tell you that I love the Kiva website. That whole idea is just brilliant and I didn’t know about it before learning it from you!

Judith: Yes. We raised so much money for them last year. “The Trial of the Catonsville 9” was a huge success. It was supposed to only be a one night performance, but it sold out and we had to have an encore performance the next day. People came from all over (New York, Virginia, Toronto) to see the performance. So, I’m hoping that the Troubadours of Daytime will be an ongoing thing. Whether it's always a fundraiser like last year and this year, I don’t know. But, so many actors on soaps (not just The Young and the Restless), but others like John Callahan (Dr. Baker, Days of Our Lives) and Ron Hale (Ryan’s Hope/ General Hospital), making it truly the Troubadours of Daytime, not just Y&R. This one will be such a small cast, so it will probably just be Y&R. Everybody just loves to do theater so much. Serious actors do love to flex their emotional muscles, so I do see a bright future for the Troubadours of Daytime!

Soaps.com: Tell me about The Vineyard Tuscan Grill.

Judith: VTG is James’ (my other half). He's had a restaurant in Palm Springs for many, many years.

Soaps.com: Do you take any part in the restaurant?

Judith: No, not really. I stay so busy. But about a year and a half ago he decided to close the old restaurant (St. James) and opened this entirely new one. I must say, it is magnificent! As a matter of fact, I was just in there on Saturday Night. With my schedule, I just go in from time to time and meet and greet. A lot of fans come in and we have a lot of friends that pop in as well. So, I like to go in when I'm back home in Palm Springs and say hello to people since there are many of them that I don't have the opportunity to see as often as I would like.

Soaps.com: You are so beautiful and conscious about the environment at the same time. What eco friendly beauty tips can you provide to our readers?

Judith: As a real southern girl, the first thing I say is wear big hats! Even though I live in the desert I always wear a hat. I'm known for wearing hats. Drink lots of water! Exercise, exercise, Exercise! Even if you don't like it, try to do something. Anything to keep moving! I'm an avid yoga practitioner and have been for many years. When I'm not doing yoga, I'm on the treadmill or something. I was on there for an hour and 20 minutes this morning, but sometimes you don't have that amount of time, and that's ok. I'm off for a few days so I could this morning. Drink the water and stay away from the sodas! Try to cut back on the sugars, keep moving and try to have a positive attitude…even when times are tough!

You can also find two more parts to this interview and a third on it's way. Check out
Judith Chapman Interview: Her thoughts on alter ego, Gloria! and then read how Judith talks about going 'green' on our sister site, Soap Opera Fan.

Y&R's Vanessa Marano in Trust Me!