Interview: The Young And The Restless’ Max Ehrich

Soaps.com: You have such a long history performing with so many different experiences. How does working on a Daytime soap compare with some of the other things you’ve done?

Ehrich: I relate it the most to theater because you do a scene in one take. It is almost even more difficult than theater because you get a new script every day and it is such a quick pace. I really can’t compare it to anything else I’ve done. I have never done anything else like this, where the turnover is so quick you do everything with no rehearsal time, which is a rush. Definitely a rush. And I have so much profound respect to anyone on a soap opera because I understand how much work it is.

Soaps.com: Were you able to work with Jeanne Cooper before she passed away.

Ehrich: I did not. Most of the times I would see her would be in the hallway. And since it is the 40th year we have had a bunch of celebrations. She was always such a bold spirit. There is something about her where she was so honest and so truthful and just didn’t care – not in a bad way. In a way where she had such an authentic quality around her it was cool to be around.

Soaps.com: Can you tell us anything about what is going to happen with Michael (Christian LeBlanc), Lauren (Tracey Bregman) and Carmine (Marco Dapper) and how Fen feels about it all?

Ehrich: It is definitely not easy in Fen’s world right now. And right now Fen doesn’t even know what is going on and the reasoning why, so he is blaming it on himself and trying to put the pieces together. When he does find out though, I can assure you that it will not be smooth sailing. Definitely not smooth sailing. It opens up a whole volcano of emotions and that is all I can say about it. But for me, as an actor playing the role, I am so happy with the stuff I am getting to do and the place I am getting to go.

Soaps.com: Do you know who you are taking to the Emmy’s yet?

Ehrich: Yes. I am taking my mom and she is beyond excited. If it wasn’t for my parents support in my life, who took me to all of my acting classes and all of my performance classes and performing arts school, they are my No. 1 fans and without them there is no way I would be here. My dad is coming out here too with my grandparents. Not everyone is coming to the actual show but we are going to have such a festive week and weekend. They are coming in from New Jersey and I am really grateful for them. They have been awesome through everything.

Soaps.com: Well congratulations and have fun. It sounds like you are going to have an incredible week. And thanks for speaking with us on a Friday night.

Ehrich: Thank you. I have no idea what I am in for and I am just going to go along for the ride. And Fenmore is much more rebellious than I am. You would be surprised how chill my Friday nights are. But if it was Fen it would be much more exciting.

Check out all of the dramatic footage from Ehrich’s submitted scenes from the 40th Annual Daytime Emmy Reels. Then get to know Ehrich’s former costar Eileen Davison better in Soaps.com’s Interview with Eileen Davidson.

Join us on Twitter @soapoperafan, and Facebook. Come tweet and Facebook with us about "The Young And The Restless" all the other soap operas, "Dallas," "Glee," "Grey’s Anatomy," "Pretty Little Liars," "Revenge," "Vampire Diaries," and "Venice The Series." 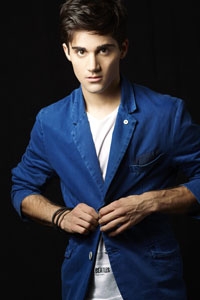 “I knew it was a story that needed to be told.”

When a rapidly-aged Fenmore Baldwin returned to Genoa City last year, actor Max Ehrich was given the opportunity to sink his teeth into a front-burner storyline right from the headlines as he became infatuated with Summer Newman (Hunter King) and partnered with her in bullying Jamie (Daniel Polo) online. Not that Ehrich couldn’t handle the pressure. At just 22, the practicing Buddhist studied Shakespeare at the London Academy of Dramatic Arts and has appeared in “Ugly Betty,” “Parenthood” and the Lifetime movie “The Pregnancy Pact.” Nominated for his first Daytime Emmy for the role, Ehrich shares with Soaps.com his thoughts on his Emmy reel, his plans for the big night, and what is down the road for Fen and his family.

Soaps.com: Congratulations on your Emmy nomination.

Soaps.com: How did you find out you were nominated?

Ehrich: I got a call really, really early that morning. I was filming that day and so when I was woken up, at first I thought it was a dream. Then I saw that someone was calling me and it was a bit frustrating because I am from the East Coast, so a lot of friends and family will call me not thinking it is two hours ahead there. So I saw a friend called and I was really pissed off because I had a really long day ahead. And then I saw all of these notifications from Twitter of all this stuff. So I listened to a voicemail and found out that I was nominated. It was like four shots of espresso – it just gave me a jolt of overjoy and excitement. It’s so crazy because that is when it felt the most real, those first four minutes. And then it just kind of felt surreal.

Soaps.com: Who did you call first after finding out?

Ehrich: My mom. And then my dad. It was really awesome. Definitely my family was the first and then my friends, a lot of whom I went to school with at the Professional Performing Arts School in New York. A lot of it feels like a dream in a sense. Ever since I moved out here and I get to do what I love to do for a living, it is kind of enough already. So to get this kind of recognition and a nomination, it is just not something I ever really thought would happen. It is just a weird phenomenon to me. It’s amazing for me because it is recognition from your fellow artists. It is nice to get feedback and stuff on Twitter and from fans and everything, but to get that respect from my peers means the world to me.

Soaps.com: Is it tough going up against a co-star (Bryton James as Devon Winters)?

Ehrich: I don’t really see it as a competition at all. It feels like we’ve won just by being nominated. I have seen everyone else’s reel and I am such a huge fan now of Chandler Massey’s (Will, “DOOL”) work which I saw for the first time in his reel, and even Bryton’s work from our show, and I would be thrilled for them if they won. And if I won I would want to bring everyone up with me. I don’t think there is a winner or loser in these sorts of things.

Soaps.com: How did you decide on the reel you submitted?

Ehrich: I chose this reel because it was a particular episode where I felt really out of control. It was when Fen kind of took a turn for the dark side, when his emotions for Summer surfaced to such an extreme that he kind of lost it. And I found that I lost myself in that day. I remember that specific day and those specific scenes. I didn’t watch many episodes to compare it to because it was a feeling that I got when I filmed it that I just knew it was a really special episode for me. Whether it was my best work, I have no idea. To me it felt the most – it was something I had never done before, being that dark and out of control, so it was definitely a learning experience for me. That is why I chose it.

Soaps.com: There really was a wide range of emotions in the reel.

Ehrich: Thanks. And in comparison with the other reels, everyone is such a bold character that it is so hard to compare anyone because everyone in their own right has such a great take on their character.

Soaps.com: Did you feel a certain responsibility to get the cyber-bullying story right considering its prominence in the media?

Ehrich: I think for me it definitely lit a fire. I have personally experienced bullying and I have many friends who have experienced bullying as well, and it touches home to such an extreme that I knew doing a storyline related to it was exciting. I knew it was something that was going to be moving to the audience. I knew it was a story that needed to be told. I hope that it has helped spread awareness of the epidemic. It is really out of control right now because everyone is trying to find a reason to isolate everyone else. For me in particular, I have always been an artist and have always been a creative person and have always thought outside the box and am always rooting for the underdog. To be on the opposite end in this particular storyline was interesting, but I definitely feel like I could draw from my experience. And I was just happy they trusted a few young actors with a really important storyline. On such a culture-driven show to have such a big storyline, it was thrilling that they trusted me to go to that depth.

The Young And The Restless Saturday Teaser Poll: Warning

The Young And The Restless Spoiler Video: Shame Blame