[youtube https://www.youtube.com/watch?v=ndShfVNs7Dw?rel=0]Although Jeanne Cooper was extremely proud of having been a part of pushing the boundaries of television with the face-lift story, in Jeanne Cooper's last interview with Soaps.com, she said it was her own family she was the most proud of; her three children, Corbin, Caren, and Colin, and her many grandchildren. The family released the following statement regarding her passing through Corbin Bernsen's Facebook page:

"A beacon of light guiding us all toward humanity, humility, and equality has been extinguished but a shimmer of it will always remain as reminder from her to us all of a kinder world that is here for us each to embrace feed and make flourish in a way her truest work has just begun for us to honor her vision and make that her legacy. One of the last great Broads in our business – Jeanne Cooper (84 years old) - Mom - is now stirring up trouble in great beyond."

Following her passing, many of Jeanne Cooper's co-workers, from past to present, spoke out about the respected and admired actress. Read Kate Linder and Lauralee Bell’s Jeanne Cooper tributes.

Jeanne Cooper's final scene as Katherine Chancellor has already aired. It was the scene in which Jill watched her go up the stairs to bed, and Katherine turned and said, "Good night." Somehow perfect... There is no word yet as to how "Y&R" will handle the role of Katherine from this point on. Soaps.com will provide an update when that information becomes available.

Jeanne Cooper and her contributions as an icon in the Daytime television industry, as a philanthropist, and as an all-around inspirational woman will never be forgotten by those of us at Soaps.com. 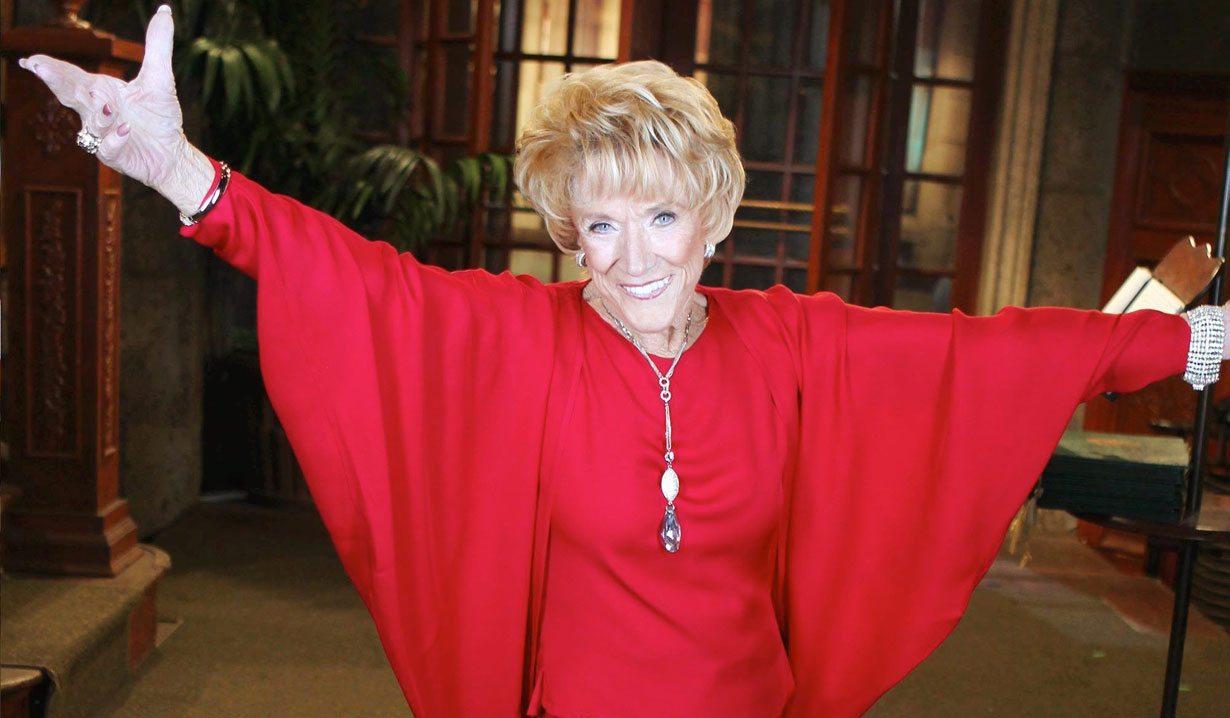 Jeanne Cooper’s son, Corbin Bernsen, shared some information pertaining to her death on his FaceBook page. He posted: “Wilma Jeanne Cooper died on May 8 2013 at 9:50 AM. The official cause of death was primarily advanced COPD.” Bernsen expanded on the subject of COPD somewhat, saying, “First and foremost, I really don’t want to enter into a long dialogue about COPD. It killed her and that’s that. There is one thing and one thing only that you need to know: If you smoke, quit. If you haven’t started, don’t! It is an ugly end. My mother’s passing and the last few weeks of her life, as you might have been able to deduce from my writings during that time was hectic, and not pretty. She was in the end, in peace, without pain and fear, we made sure of that. But it was a battle. Not being able to breath… do the math.”

He also spoke of trying to plan a live streaming memorial for fans at some point in the future (Soaps.com will keep readers updated), and said he had made a limited number of copies of his film, “Carpool Guy,” available for purchase through Home Theater Films. Bernsen explained, “They are in ‘The Store’. I will be enclosing with each copy a signed thank you card for your purchase, as well as a note about a contribution that will be made in your name to one of her favorite charities.”

FYI: COPD, or Chronic Obstructive Pulmonary (PULL-mun-ary) Disease, is a progressive disease that makes breathing difficult. “Progressive” indicates the worsening of the disease over time.

Jeanne Cooper was born Wilma Jeanne Cooper in Taft, California on October 25, 1928, of English, Irish and Cherokee Indian descent, something she’s always been extremely proud of, to Albert Troy Cooper and Sildeth Evelyn Moore. Cooper had many memorable storylines over her 40 years on “The Young and the Restless” playing Katherine Chancellor. Her first was a doozy, with a volatile and heartbroken Katherine, also a drinker at the time, driving herself and her ex-husband Phillip off a cliff. Phillip married Jill right before succumbing to his injuries. Jill stealing Katherine’s husband set off a rivalry and love-hate relationship between the women that spanned four decades, and brought viewers some of the most entertaining cat-fights and one-liners ever to be showcased on “Y&R.”

Throughout her years on “The Young and the Restless,” Katherine battled alcoholism, had amnesia – and a doppelganger – came back from the dead, saw her grandson who was believed to be dead return to her life, and found her long lost son. ‘The Duchess’, as son Brock called her, also ran her own empire, Chancellor Industries, and took many a Genoa City resident under her wing, offering the most sage advice in town. She had long-running business relationships and enduring friendships with many, including John, Nikki, Victor, and of course her companion/maid, Esther.

Perhaps the most memorable, and well-publicized, storyline in her four decades on “Y&R,” was ‘the facelift’. Jeanne Cooper was undergoing a facelift in real life and it was decided that Katherine would also go under the knife on television. This was very cutting edge stuff for the time! To hear Cooper speak out about this storyline, watch the clip below:

The Young And The Restless Spoiler Video: Troubled