Soaps.com Talks about Death in Daytime with Eileen Davidson! 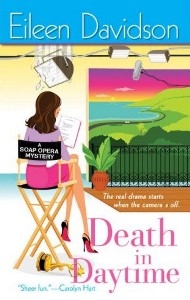 Soaps.com recently had the opportunity to chat with enterprising actress Eileen Davidson about her first novel, Death in Daytime. It is a light, entertaining read; quick-paced, witty, and a must-have for fans of soap operas. Since Eileen has now made the jump back to The Young and the Restless from sister soap, The Bold and the Beautiful, we also asked her some questions about her alter-ego, Ashley Abbott, and what to expect for her!

Soaps.com: I read your book last night and just loved it! What made you decide to get into writing?

Eileen: My husband [Vincent Van Patten] was writing a book with [author] Robert Randisi. Robert had contacted my husband to write a mystery/thriller [surrounding] the poker world. My husband is a co-host on the World Poker Tour. Robert came over for dinner one night when he had flown out here to work with Vinnie, and I just threw it out there, you know, doing something about the soap world. He thought it was a great idea, but we never brought it up again. A couple of months later, I just said, “Well what the heck,” and I called him up with the idea, and he told me to write it up and we’d pitch it to Penguin. They gave us a two-book deal! They actually just asked for the third book last week.

Soaps.com: That’s great! They always say to write about what you know, which explains the soap opera theme of your novel, but what made you decide to incorporate a mystery into the story?

Eileen: I’ve always loved mysteries, and I (and I think a lot of women), tend to really gravitate toward forensics for some reason; figuring out a puzzle – I don’t know what it is. I watch a lot of those forensic shows and that kind of thing, so it just seemed like a natural.

Soaps.com: The main character of Death in Daytime, Alexis, is very easy to relate to and identify with. Is her personality modeled on your own, or someone you know?

Eileen: Roughly, sort of. She [Alexis] just has the same kind of life that I have, I took little bits and pieces of my own life, threw them in there a little bit.

Soaps.com: Would you say Alexis has a similar personality to you?

Eileen: Somewhat, yes. I mean, I had to give her a voice, that’s the most important thing you can do for your lead character. So, you know, I gave her that voice, and I suppose it was very similar to my own.

Soaps.com: The book, and most notably, Alexis, has a great, wry sense of humor. References to Alexis hating being called a ‘Diva’ come to mind – are these taken from your own experiences?

Eileen: Yes, that would definitely be one thing that’s very much like me. I’ve always hated that term!

Soaps.com: Your novel moved at a great pace, and the mystery was genuinely intriguing – I’m looking forward to the second one – especially after the sneak peek for Dial Emmy for Murder at the end of Death in Daytime!

Eileen: I think the second one’s even better. Bob [Randisi] and I, are learning how to write together in the first book, and I think it’s just kind of a learning process when you’re just starting out like that. For the third book, I pitched the idea a couple weeks ago and they loved it, so you know, we’re kind of hitting our stride now.

Soaps.com: How soon until the next in the series comes out?

Eileen: It’s going to print in February. But I don’t know, it’s a really long process. It takes [about] nine months after you hand the book in! We handed that book in, I think…in September? So, I don’t know. March? April? Maybe we’ve got to speed it up a little bit!

Soaps.com: You have another venture called ‘Femmeology’ what can you tell us about that?

Eileen: Yes, that’s my clothing line. I’ve kind of shelved it for now, just because of the economy, and I was looking for somebody to kind of oversee it, take it over for me – the financing and everything – and because of that, it’s just kind of rocky. So instead of putting more money into it, I’m not dismantling it, but I’m just kind of freezing it for a little while, to see what happens with the economy, because it’s just a very difficult time to start a clothing line.

Soaps.com: Do you have any other projects on the go?

Eileen: I just got an infomercial, so I’ll be doing that in a couple weeks.

Soaps.com: Great! Can you say what the infomercial is for?

Eileen: It’s for a micro-dermabrasion system.

Soaps.com: How did you feel about coming back to The Young and the Restless from The Bold and the Beautiful this time?

Eileen: I’ve been having a great time, you know, it’s a lot easier over here, just simply because I have family, and there’s more for me to do - I'm more entwined in the story. And, I just have such history with everybody here, both personally and professionally. There’s so much to draw from. But I had a great time over there.

Soaps.com: We recently heard that Don Diamont would be leaving. As a respected person in Daytime television, what is your opinion on the current climate of cutbacks, and how it affects not only actors, but the future of the genre as a whole?

Eileen: I don’t really see a future for it, I don’t really know. There used to be so many shows, relatively speaking, we’re just kind of paring down, you know, everything is changing and cyclical - it's just kind of a part of life in general - and our medium is now experiencing that. It’s tough, but everything changes in life, and I think it’s just part of the process. It’s been a great ride, watching the whole thing and being on the train during the heyday - we would get a ten point rating share - that was the number one show with a ten, and the number one show now is [getting] a three point six [rating share]. So, I’ve seen it all happen, and bounced around from a lot of different shows, by my own choice, so, I’ve experienced a lot of different facets of it, and this is just another one. Unfortunately, there are some casualties along the way, and I was one, a couple years ago on the show, and now it's Don Diamont.

Soaps.com: What are your thoughts on Ashley being paired with Victor again?

Soaps.com: Were you surprised that they decided to age Abby [Hayley Erin]?

Eileen: Not after I heard Noah [Newman, Kevin Schmidt] was aged, and not at all actually, because if you’ve noticed, you either have babies, small kids, or teenagers on soaps. The middle years, you’re kind of lost there. So for whatever reason, teenagers, you know, there’s more drama to play. And it opens up a whole new avenue of story.

Soaps.com: Do you ever get tired of the sibling squabbles with Jack [Peter Bregman]?

Eileen: Never! There's always so much to play, and he’s such a dear friend, such a great person to work with.

Soaps.com: Can you give us any hints about what is coming up for Ashley?

Eileen: Actually, [speaking of] Abby, there's going to little bit of a tug-of-war between Victor and Brad. Ashley finds herself stuck in the middle of that kind of drama.

Soaps.com: What do you do in your down time?

Eileen: Honestly, I don’t have that much right now. You know, I’ve got a five year old, and two stepchildren that are thirteen and fifteen, and we just have very full, busy lives, with the kids.

Soaps.com looks forward to watching Eileen as the self-assured and beautiful Ashley Abbott as she spars with Jack, Brad, Victor, and deals with daughter Abby's teenage issues on The Young and the Restless! For Soaps.com readers who wish to purchase Eileen's first novel, Death in Daytime, check your local bookstore, or click here! For more on Eileen visit her official website!

The Young and the Restless Video...