Soaps.com: Some Soaps.com readers would like to know about your hobbies and interests outside of Y&R.

Eric: Well, I read extensively. I read foreign affairs, New York Times, L.A. Times, a German newspaper called Die Zeit. I'm interested in mostly historic stuff, real stuff, and I love historic novels based in reality. I spend a lot of time in sports. Sports have been my saving grace, to be honest with you, it's how I relax, it's how I meditate. It's how I de-stress, always has been, all through my life. I won the German Youth Championship in discus, javelin and shot-put with the team that I was on, and then when I came here, I played a lot of intensive soccer and we won the U.S. Championships in '72/'73. I don't play soccer that much anymore, but while doing that I started boxing in the ghettos of L.A. and have enjoyed that enormously - I still do that partly - although not sparring as much anymore. I play a lot of tennis, and I do Olympic weightlifting, which is different from bodybuilding. I love to go out to dinner with friends and family. I love to play with my granddaughter [Eric confessed to me earlier that she has him wrapped around her finger!] She has a wonderful imagination; I just think she's going to be a performer or director - or both!

Soaps.com: What career would you have chosen, if not acting?

Soaps.com: Why not get involved in politics now?

Eric: I've been asked. To be honest with you, [it's daunting] knowing more and more about the process, and how you rarely get to really deal with the essential problems.

Soaps.com: So you are turned off by the political process, in which it takes so long before you get to a point where you can actually effect change?

Eric: Exactly. I think I would knock some heads! [laughs] Obviously, you go in knowing that you will be attacked in a scurrilous fashion. This man [Obama] who is [coming into] power now, has the right temperament, I think. He is tenacious, very tough, but yet he has the right temperament - I don't feel he has the need to really hit back hard. I have a need to hit back hard - I would hit back hard! But, you need someone like that who still has strong, passionate convictions, but is willing to compromise.

Soaps.com: One of our female readers on Soaps.com asked me to tell you that a lot of women are crazy about you, they don't want you to retire - don't even think about it - and that you are a lot more interesting than any of the "young punks" on the [Y&R] today!

Eric: I'm very touched by that! That's a very nice comment - very nice. Tell her that I am, at heart, 'Young and Restless' [laughs], I really am!

It was an extraordinary experience hearing Eric's insights on Victor Newman, life, politics, and his new movie, "The Man Who Came Back". Our sister site, Soap Opera Fan Blog, is carrying the companion portion to this interview, where Eric gets in-depth about Victor and his latest storylines. If you missed it last week, click here, to read our discussion about Eric's new movie, and learn how to get a copy for yourself! For more on Eric, visit his official website. 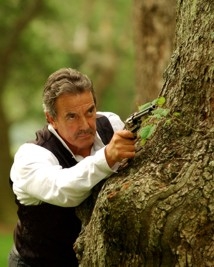 As Soaps.com readers might have guessed, Eric Braeden is a very interesting person to sit down and talk with, whether discussing his new film, “The Man Who Came Back,” or getting in-depth about his alter-ego, Victor Newman, which we did in the first portion of our chat on Soap Opera Fan Blog. It was also very interesting to learn a little bit more about Eric himself – the man behind ‘The Moustache’!

Soaps.com: To what do you attribute the enormous popularity of Victor Newman, a role that has helped make you the most recognized actor in the world, and what have been the best and worst parts of playing this character?

Eric: I honestly don’t really know [what makes Victor so popular], I think maybe fans have the answer to that question more than I do. I just know that I bring a lot of who I am into it. I have a deep sense of what is fair, I think, and I have a deep sense of outrage toward those who go against me – if they go unfairly against me. I was third amongst four brothers – we fought all the time. I grew up in tough times, you had to fight – but it is never to bully – it is to right wrongs. That is what Victor feels. If I feel you have wronged me – I’ll come after you! I have a great proclivity for vengeance, but I can be very vulnerable as well – I guess that comes out. I’m so thankful for this role – I used to play only bad guys – it became boring. Bill Bell and I talked, years ago, and I asked him to give [Victor] a social background that explains who he is, and he came up with the brilliant idea of him being left in an orphanage. It’s sort of close to how I grew up in real life, in a sense, so I could tap into that – that deep sadness, and never trusting anyone really. I’m deeply loyal to this character – and to the show.

Soaps.com: What has been your favorite storyline as Victor?

Eric: There have been so many! I keep coming back to this one – it touches something in me – that is when Dorothy McGuire comes back and plays my mother [Cora Miller]. I don’t even know her anymore, didn’t even know she was alive after she left me on the steps of an orphanage. I question her, and suddenly she says something only my mother could have known, about a hole in a sweater. I didn’t know how to play that scene before, I had no idea, and suddenly something happened in the scene – I don’t know what it was – and it’s still one of the most memorable scenes I’ve ever done, because of the mixture of enormous sadness and anger and hurt. Similarly, another of my favorites scenes, was when I went with my son [Nick, Joshua Morrow] to see George Kennedy, who played my father, and he’s cold – whoa! That also was one of my favorite scenes, there was something fundamentally tragic about it, and real. I also enjoyed playing the scene as I envisioned it before I went – when I played myself as an old man – I enjoyed that enormously. [Eric also counts powerful scenes with Jack, Victor being alone with Zapato, and the touching scenes where he admits to Nick that something is really wrong with him, as being among his past favorites].

Soaps.com: It has recently been announced that Don Diamont will be leaving the show, and many viewers are upset about this development, and concerned about the current climate in Daytime. I happen to think that Y&R is better right now than it’s been in quite a long time, so I’m somewhat optimistic. What are your thoughts?

Eric: I agree with you [about the show], Maria Arena Bell is doing a really good job. As an actor, it is now, suddenly, becoming interesting again. I think it’s an egregious mistake to let Don Diamont go. He was involved in too many storylines. It’s a mistake, and I disagree with it completely. If the climate is one of wanting to save money and all that, well then, there are a number of other people that should go, as far as I’m concerned. He was an integral part of the show, and involved in everyone’s storylines, that’s my opinion.

Soaps.com: Do you have an opinion on the outlook for the soap industry as a whole?

Eric: Well, obviously the economic malaise is such that advertising revenue is [affected], and who knows to what length they are willing to go to save money? The top shows will survive, beyond that, I am the wrong person to ask. I think if the writing to continues to be in her [Maria Arena Bell’s] hands for our show, I think it’s very entertaining – I love watching it! I must say, I’m very hopeful!

The Young and the Restless Video Clip: Look at 2009!

The Young and the Restless Says Goodbye to Michael Gross!