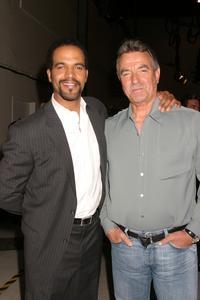 In “The Young And The Restless” history, the early 2000s, Victor Newman blackmailed Michael Baldwin to put Newman ahead of Jabot…

Though Congressman Wheeler is threatening to expose Victor if he doesn’t help his cause for what appears to be a political cover-up, Victor knows his way around blackmail and has used it to his advantage more than a few times throughout the years. His current under-handiness also stems from his need to regain Newman.

The war between Newman Enterprises and Jabot Cosmetics was at an all-time high when Newman outbid Jabot and bought out a company that sold products for women of color called Satine Cosmetics. During the time various family members worked on opposite sides: Nikki was married to Victor and worked for Jabot, Phyllis was married to Jack and worked for Newman, and Neil worked for Victor while his wife Drucilla worked for Jabot. In fact, inside information that Dru unintentionally slipped to Neil made it possible for Victor to win the bid.

Jabot’s hands were tied, which led them to revive one of Ashley’s old projects called Tuvia. Being married to the competition allowed Dru to seek vengeance against Newman when she found out Neil and company planned to hire chemist Damon Porter, who Dru managed to lure over to Jabot.

Victor refused to play fair and made sure Jabot’s new line failed. He found out that Michael Baldwin had covered up key evidence in a case surrounding Christine Blair and Isabella Williams and blackmailed him into buying up all of the prime shelf space by paying off large retailers.

Check out our Flashback in B&B History: Deacon and Macy and read Soaps.com’s Dallas Recap to find out who stirred up things for the Ewings in last night’s episode.

Ex-The Young And The Restless'...