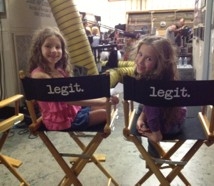 Bianca and Chiara D’Ambrosio, who played Summer Newman on “The Young and the Restless,” are set to appear on FX’s “Legit” on Thursday February 7. The show airs at 10:30 PM EST. In the episode, Jim (Jim Jefferies) asks Steve (DJ Qualls) to join him at a gig in Omaha and gets in an argument with another passenger on the plane on the way there.

Watch a video of the D’Ambrosio twins’ anti-bullying single. Find out who ends up in jail on “Coronation Street” through Soap Scoop: UK/Australia Edition.