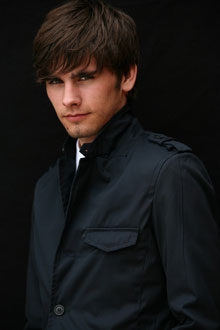 Making deals is the norm in Genoa City, but they’re not always in the boardroom…

Soaps.com spoke with the talented new actor who has been turning heads playing the bad boy drug dealer who confesses to us, “I didn’t want to play the stereotypical ‘heavy breathing, back ally’ version.”

Soaps.com: Daniel, tell us about how you came to hear about the casting call for Kieran Donnelly.

Romer: The audition came through my agent. I was excited until I realized that I wasn’t going to be able to go! I was in the middle of shooting a web series, and scheduled to be on location all day. Originally it couldn’t be worked out for me to leave set, I had several scenes to shoot that particular day. Then by sheer happenstance within a couple of hours of my audition time, I got dismissed between my scenes. The location was too crowed for anyone who wasn’t involved in the immediate scenes to be there. Basically I left the set, ran my lines a few times, made it to CBS in time to do the audition, and was back on set before my scenes were up. Needless to say I’m happy that it all fell in to place!

Soaps.com: What were your first thoughts about the character Kieran Donnelly?

Romer: Just reading the character description I was interested. I have had the pleasure to play the bad boy a few times and I truly enjoy it. I did not know the back story on Kieran going in to the audition, all I knew was that Kieran was a dealer who was selling to Jack. I didn’t want to play the stereotypical “heavy breathing, back ally” version. Instead, I chose to play the guy that you see and talk to everyday and never have a clue. The challenge was to create someone who could be seen in the company of the Abbots, yet also dealt with the lower classes. Luckily I made good character choices in the audition and booked the role.

Soaps.com: What’s the experience been like for you working on the set of the “Y&R?”

Romer: I have had the good fortune of working on a few sets in my career both on location and in the studio, but nothing could have prepared me for the soap experience. I have never been on a set where everyone is doing their job so well that production can get through 40+ pages in one day! I had the pleasure of having two scenes on the first day, which were blocked, shot, and I was out the door in the time it takes other productions to set up the first scene. They shot most of the scenes including mine in one take!

Collectively, the people of ‘Young and the Restless’ are an amazing group to say the least. From the director to the production assistant, every person I encountered was friendly and helpful. The highlight was when Jack Abbott, played by the legendary Peter Bergman, offered to rehearse with me before we shot. I thought it was really cool for someone of his caliber to do that and I gained instant respect and genuine likeability for him as an actor and a person. During rehearsal, Peter revealed information about the show, his character, and gave me an insight to my character which I was able to use to better understand and connect with my character. The entire experience has been amazing. I am truly blessed to have worked alongside this famous family of performers.

Soaps.com: Had you watched soaps in the past? Has anyone in your family?

Romer: I really haven’t, no. My mother is familiar with soaps. I found out that some extended family members have apparently watched ‘Y&R’ for years.

Soaps.com: How did your friends feel about seeing you on the show? Did they watch?

Romer: They were surprised and happy to see me. Everyone is supportive. Obviously I could not tell them anything other than I was going to be on a soap. After it aired my friends loved knowing the "soap dealer," and several quoted my lines on social media. So yes, I’m happy to say they watched.

Soaps.com: Have you seen your scenes?

Romer: I have. I find that watching helps me to self-critique what I may or may not like about my performance. I use it as a learning experience. In the case where there is a chance to do multiple episodes I want to establish the basis of my character and keep it consistent from the first show.

Soaps.com: Can you say who Kieran will be sharing scenes with upon his return? Will fans be seeing him conversing with Kyle (Blake Hood) or will it have to do with Jack's storyline?

Romer: I appreciate the interest but actually details of any kind are something that I cannot divulge. Even if that were something I could do, I think I would choose not to. I think part of the fun is really not knowing but perhaps guessing what might be ahead. Hopefully everyone will watch.

Soaps.com: Do you think there could be room for a more substantial role for you at "Y&R?"

Romer: I do. As an actor you get involved in the story. I really like creating and developing characters, so I can see many possibilities for Kieran. I look forward to whatever the show has/could have in store for my character and myself.

Soaps.com: What would you like to tell fans about that your new webseries coming out soon?

Romer: I play a lead character. It is a series of nine short episodes, coming out in the springtime. It will be on the globally renowned fashion site called LookBook. That’s about all I can say now but I look forward to updating everyone once I can. If anyone cares to know more, I can be followed on Twitter at DanielRomer1 or on Facebook. Thank you for allowing me to connect with the followers here on Soaps.com.

Daniel Romer first debuted as Kieran Donnelly on "The Young and the Restless," December 28, 2012. Romer started his acting career by doing musical theatre in high school. Since he has held roles in several TV shows, an Indie Feature, played the love interest in music videos, has experienced success in modelling, is a budding musician. Romer returns to Genoa City Wednesday February 6.