Lowell's Case: Finally, they let Lauren be her old firecracker-self again, as she ripped into Gloria, telling her to get her butt down to the courthouse or she'll never see Fen again! Loved it! Michael's elation at getting his father off the hook with his mother's help, was so sweet to watch, as he actually got to feel like a normal human being with a complete family to be proud of - for all of three seconds. The revelation that Lowell is, after all, a crook, really saddened me for Michael's sake. I suspect there will be some amazing stuff coming up as he grapples to deal with his disillusionment! This development doesn't bode well for Michael Gross [Lowell], however, as his character seems to be hitting a dead end. Kind of disappointing for such a great character to have been introduced, only to languish in prison and then turn out to be irredeemable. Guess he and Gloria will be together again after all - only in prison! Note: I like the way they are easing NuEden in slowly - Vanessa's doing a great job!

Gloria/Jeffrey: Wow! Does this guy have jealousy issues or what? I'm sort of confused with this character. He started out so entertaining and with so much potential, but lately became a bit of a mustache-twirling villain with no rooting value. There seems to have been great pains taken to showcase the fact that there is true love between him and Gloria, yet he turns on her at the drop of a hat! As much as I totally want to see Gloria have to face the music for the tainted cream scandal, having Jeff turn against her so completely, with so little provocation, has left me shaking my head. Also, why go to such extreme lengths as burning his own face? All he had to do was present the cops with the evidence! Things that make you go hmmmm…

Murphy/Katherine: I'm bored stiff with this now. Fast forward scenes for sure. Not because Jeanne isn't brilliant as pseudo-Marge, just because it's gone on too long - time to move forward!

Daniel/Amber: They are so cute starting their own business! They were so adorable telling Phyllis that they are quitting Restless Style! I love this couple, but let's keep them interesting, folks. Just because they're happy, doesn't mean they have to become sappy!

Jana/Kevin: Can you believe she gave all of Kevin's 'found' money to River, seconds before he was exposed to be a real criminal?! Watch for absolute explosives next week when she tells Kevin what she's done! Great acting!

Victor's Case: Go Paul!! I'm all about Paul getting in Victor's face this week and telling him straight up that he's been treating Nikki like dirt! Thank you! Not only did he look him in the eye and do it, but Victor was still compelled to have to ask Paul for help in getting out of jail. Nice. Paul, of course, thrilled me as he went all over town, putting Heather, Adam and Jack on notice that the stuff's about to hit the fan! 'The wall's are closing in!" What a man! What a detective! No wonder the majority of Soaps.com readers want to see Nikki with him! I'm surprised that it's taking TGVN this long to get himself out of jail, though. And who could believe it when Adam smugly got up and walked out after being offered a second chance by Victor?! Give him a dunce cap and sit him in the corner! Of course, he and Jack are both done like dinner, and the longer Victor has to sit in there asking people for help, the more angry he'll get… On the bright side, I think 'dim bulb' Heather, after hearing Paul's warning, reading Frank's confession and speaking to Victor, may slowly be pulling her head out of the sand! Stay tuned!

The Winters family: Oh, that's right, they weren't on at all this week! Can someone explain this to me? Anyone?

So, I'm ticked about the casting news, but the storylines have been great. Everything began to turn around back in November, and it shows no signs of stopping, which is great news for viewers! Other than the Winters clan and our new hottie lawyer, Rafe, going MIA, it's been a really dramatic and enjoyable week! Congrats to the writers for finally addressing the face cream! We will never have to hear Jeffrey threaten Gloria with it again! Kudos, also, for attaining the milestone of twenty years at number one - that's huge!

Please feel free to post your own thoughts below. Even if you don't agree - it's fun to try and change my opinion - it's happened before - I'm actually kind of fickle!

I’m pulling no punches this week regarding the recent news that Don Diamont [Brad Carlton] will be released from his duties at The Young and the Restless. If you have been reading Soaps.com’s comment and message boards and polls, it’s clear that a majority of fans have been clamoring for more of the popular, handsome and charismatic character of Brad Carlton – not less! Brad is a long-term character that evolved from being Jill’s pool boy, to a successful and intriguing leading man. His recent backburner status has done nothing to spoil his popularity, and you won’t be able to take Don’s paycheck and buy that kind of fan loyalty for any price! Of course, we don’t know the details of what led to the exit, but if this ouster is linked in any way to the financial situation of the show, might I suggest that there are numerous other characters on the show who are much less integral and beloved that may be better choices for the chopping block. Here’s hoping they take another look at this decision – maybe they can find a way for him to stay! In other casting news, the show has committed to a long-term storyline for Tyra, putting Eva Marcille with the show on a permanent basis, rather than recurring. Vocal fans have already started asking why a beloved character like Brad has to go, when a decidedly unpopular role like Tyra’s is being beefed up?!

On December 11, the Y&R cast and crew celebrated an incredible 20 years that the show has been rated number one according to Neilson’s ratings! The top-rated show has been darn good this week – so on with it!

Chloe’s Fall: Everyone asks, “Why was she on a ladder in the first place?” Answer – because this is a soap opera and the fall was a necessary turning point for this quadrangle. I was so happy to see Lily tear into Chloe at long last, but I suspected she’d ruin her newly sprouted attitude by overcompensating, drowning in guilt, and kissing Chloe’s butt after ‘the fall’ – and that’s exactly what she did! Just when I thought this character couldn’t get any further from behaving like a real person, she actually told Billy at the coffeehouse, that she admired Cane and Chloe for staying together! Un-freaking believable! I loved the conversation between her and Billy though – he was so funny telling Lily that if he were Cane he’d ‘go there again’! Lily looked like she’d been slapped. Poor, naïve girl! As for Chloe and Cane, I’ve become the writers’ puppet, and have fallen for the couple just as they hoped. These two play off one another really well, and have an interesting dynamic based on similar backgrounds. Chloe’s secret is going to come out and she’ll have to pay the price, but I will enjoy seeing them fall in love in the meantime. My take on Chloe – she’s not pure evil – more like impulsive, calculating, complex, slightly wounded, misguided, with ‘daddy’ issues. That’s what makes the storyline so good – she has aspects that viewers can relate to and sympathize with, rather than being a one-dimensional villainess. My guess is that the next turning point will see Cane and Lily reunited, and Chloe and Billy facing being parents together. This would be interesting because though it sounds like a simple switchback, I suspect that Lily would find herself the recipient of a very different Cane than she broke up with – he won’t bounce back easily from having fatherhood snatched away a second time!

Jack’s Lies: What a riot watching Jack wallow in his own mess – he truly never learns that honesty is the way to go! Some niggling little part of me feels like he went too far this time though – like he has debased himself to the point where his actual intelligence is in question, and that bothers me. Jack is sneaky and underhanded, but he’s far from stupid. Surely he wouldn’t believe that he could make this ‘sex addict’ story fly? All I know is that I love watching Ashley calling him out on everything – she says just want you feel like saying to him as a viewer! Of course, Sharon is done with him, he’s lost Jabot to his own sister, and he’s about to be exposed for his crimes against Victor. Sounds like Jack’s taking a trip to ‘rock bottom’!

Brad/Sharon: Nothing good can come of his scheming with Phyllis – except perhaps a hot love scene with Sharon! I love how he’s been there for her – even though he’s clearly her second choice. I say give this amazing guy a new business, a new relationship, ramp up his rivalries with Jack and Victor, and keep him on the show!

Sharon/Nick/Phyllis: Well, the truth is out – in more ways than one! Judging by the way Sharon lit up like a Vegas slot machine when Nick called about the business trip, it’s pretty clear that she is once again, or still, in love with him! The other truth exposed this week, was that Phyllis saw Nick and Sharon kissing in Paris. For me, Phyllis’s reluctant, but cathartic, tell-all scene with Nick was very realistic and poignant. His reaction was bang-on too, as he was too stunned to say much at first, and then said all the appropriate things as the regret and guilt rushed in. My take is that there will be no recovering from this – Sharon’s not going away, so Phyllis will continue to be edgy in her presence, and Nick will be pulled in two directions – which, I hope, is very hard for him – he’s behaved like a dog toward both women and deserves to suffer! Thanks to such realistic writing for two very different characters, I am able to empathize with each woman’s unique point of view in this situation, and I still think that they should both kick Nick to the curb! For Nick’s part, he’ll likely realize that he’s in love with two women and make an even bigger mess of everything before all is said and done! Also on this topic, I must say that I enjoyed watching Phyllis tell Jack about the kiss she’d witnessed – finally something that shut him up for a minute! Even more delicious – his realization that he couldn’t say a word about it to Sharon because he had just admitted to committing full-out adultery in a cheap motel! Haha!

Hayley Erin Joins The Young and the Restless as Abby! 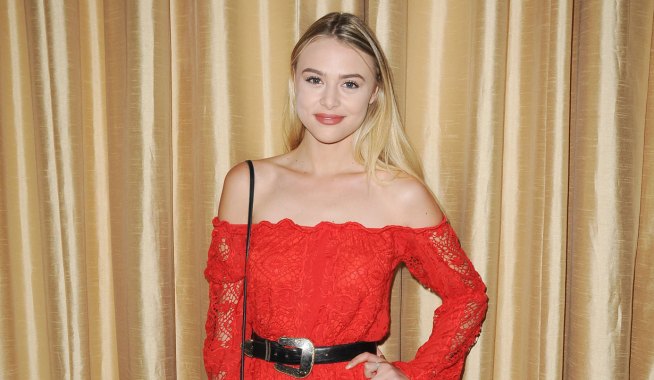