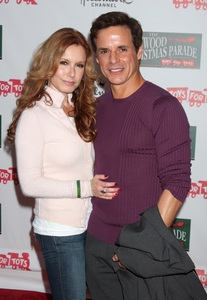 Michael and Lauren: The Beginning.

In “The Young And The Restless” history, 2005, Michael Baldwin married Lauren Fenmore…

Michael and Lauren are currently celebrating their wedding anniversary, but the events leading up to their union weren’t all happy. Lauren was the center of Michael’s brother’s obsession. Kevin was a troublemaker, and Lauren agreed to be his Valentine’s date in an attempt to find out what crimes he’d committed. When Kevin realized he was being setup, he held Lauren captive by gunpoint. Michael came to the rescue and talked his brother down.

Lauren helped, as Michael was trying to straighten out his brother’s life. Kevin believed she’d really cared about him and confessed most of his crimes to Lauren. While Michael and Lauren worked together to get Kevin the help he needed, they fell in love. Michael turned the private dining room at the club into a gambling casino and proposed to Lauren, who said yes.

Michael wanted Lauren’s son, Scotty, to be at the wedding, but Lauren was evasive about his whereabouts. Michael located Scotty, who also wondered why his mother never brought him back home. Lauren was upset Michael went behind her back and had no idea Shelia Carter – who’d she’d tried to protect Scotty from – had intergraded herself into her son’s life as ‘Brenda’.

Shelia followed Scotty to Genoa City and joined forces with Michael’s stepfather Tom Fisher. While they plotted against Michael and Lauren, Shelia soaked a necklace Scotty was giving to Lauren in poison and watched as her nemesis became ill. Lauren was hospitalized, and their wedding was postponed. It wasn’t until December 9, 2005 when the couple finally married, but their honeymoon was anything but a happy one…

Shelia and Tom planted a bomb on Michael and Lauren’s yacht and allowed Michael to believe his bride had perished in the explosion. Tom saved Lauren and stashed her in an old farmhouse. Lauren managed to convince Tom that Shelia had been using him, so he arranged to turn her over to his ex, Gloria. One thing led to another… John Abbott went in Gloria’s place and killed Tom, and Paul saved Lauren in the end and reunited her with Michael.

Feel free to leave your favorite Michael/Lauren moment in the comments section then check out our Flashback in B&B History: Katie ruins Donna’s wedding.

If you ever miss an episode read Soaps.com’s Revenge Recaps, which we’ll post beginning on Sunday January 6 after each episode airs, then keep an eye on Soap Opera Fan Blog’s Y&R Actor Appearances for a chance to meet your favorite Genoa City stars.

The Young and the Restless' Jeanne...

Y&R Poll: Which Noah Do You Prefer?