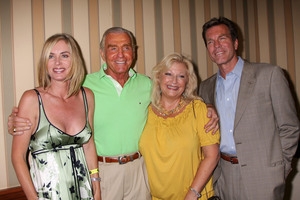 In “The Young And The Restless” history, August 18, 2006, John Abbott sadly passed away…

Though we still see John’s ghost from time to time the events leading up to his death caused the Abbott family much heartache. It all started when John overheard his wife, Gloria, on the phone with Tom Fisher, who’d been holding Lauren captive. John raced off, met Tom and ended up killing him in an alley. He left the gun behind, got in a car accident and Ashley ended up taking the blame for Tom’s murder.

John regained his memory and came forward with a confession, which landed him seven years in prison. His family worried for his safety, as John became involved in numerous fights and began to think his first wife, Dina, had just walked out on him. Overmedicating was to blame for John’s spells. John suffered a stroke just before he was to be released for good behavior. As his family gathered around John at Genoa City Memorial Hospital news came that he would never come out of the coma.

The family’s heartache only grew when the doctor alerted them to the DNR that John had signed, which Gloria, as his wife, had authority over. Though Gloria didn’t want to let John go, Jack convinced her that John wouldn’t want to be kept alive by machines. His family and close friends gathered around as John was removed from life support.

Feel free to leave your favorite John Abbott moment in the comments section then check out our Flashback in B&B History: The Logans lose their mother.

A book on “One Life To Live” will be released in 2013. Details in Soaps.com’s After The Soap Finales: Where Are They Now, and don’t forget to read Soap Opera Fan Blog’s Revenge Weekly Recaps if you ever miss an episode.