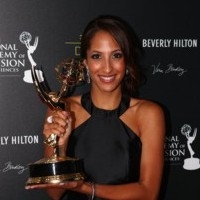 Christel Khalil (Lily Winters Ashby, “The Young and the Restless”) is headed to Primetime. She’ll appear on the sitcom “2 Broke Girls” on Monday November 5 on CBS at 9:00 PM. The episode, entitled, “The Candy Manwich,” surrounds Caroline (Beth Behrs) avoiding a candy shop owner following an embarrassing scene at his store. Khalil will appear as a ‘flirty girl’.

Find out about former “One Life To Live” actor Trevor St. John’s movie news through After The Soap Finales: Where Are They Now, and see a photo of male model Gabriel Aubry with his little girl through Soap Opera Fan Blog’s Star Gazing.

The Young And The Restless Spoiler Video: Jack's Shocker