Soaps.com: You recently finished up another stint as Danny Romalotti on "Y&R." What was it like being there for the celebration of the 10,000th episode?

Michael: It was fantastic. It was really a thrill getting together with all my buddies, you know, Lauralee Bell (Christine), Doug Davidson (Paul), Michelle Stafford (Phyllis), Tricia Cast (Nina)…I call us 'The Breakfast Club'. It was a thrill and a blast. I’m really so honored to be part of such an amazing show that has accomplished the incredible feat of [reaching] 10,000 shows. The Bell family has just done a tremendous job. Bill, I’m sure, is looking down from heaven and was thrilled with the 10,000 episodes. He and his wife created some amazing stories, characters, and arcs. It’s really touched peoples' lives for years now. I was honored to be part of it.

Soaps.com: It was a great way for fans to celebrate, having some of the past favorites back together again.

Michael: Yeah, yeah, I think it was just great, us all sitting around a table talking. There’s so much history there, you could have a lot of fun with it, and I think they did. I got some really great feedback from the episodes.

Soaps.com: Danny and Christine have quite a following as a couple. Why do you think they’re so popular?

Michael: Well, I think you have this young love, this sparkle; it may sound a little cliché, but endless love. Going back to the beautiful wedding in Hawaii, a lot of people were part of that and went along this journey with these two characters – they just really wanted them to be together. I think it’s really sweet. These two have always had this special, this chemistry, and this love for each other no matter what has happened, there’s always that bond.

Soaps.com: Danny himself is very popular among "Y&R" fans, and has firm ties in Genoa City. Could he come back as a regularly appearing character, and is that something you would be open to?

Michael: I’ve always told the show that if I’m in town, and I’m not directing a film, I’m thrilled to do the show. I have a great love and appreciation for the show and the fans who have been so loyal, not just supporting me for "The Young and the Restless," but through my music, buying my CDs, my concert tours, my Broadway play, and you know, buying the DVDs and supporting my films. Anytime I can get back on the show to say ‘thank you’ to them, because it’s something they are always asking me about; I really do everything I can to pop into Genoa City whenever I can.

Soaps.com: As a writer yourself, if you could create a story for Danny to return to Genoa City, how would you script his return, and who would you have him interacting with on the canvas?

Michael: Well, I kind of like how they set it up with Danny and Cricket wanting to, you know, 'Could this happen? Could we get it right?' I think they should do it again – they should have another big wedding and they should go back to Hawaii. They could do a parallel and see flashbacks, and sort of recreate that in 2012 or 2013. I think that would be kind of nice. The fans would be thrilled. Then there could be some sort of sabotage plan that happens in Hawaii. [Sinister voice] Who could that be? Who would crash the wedding uninvited? Who produces a legal document that technically he’s still married to her? [laughs] It wasn’t notarized! It was a mistake! Legally he’s still married to Phyllis! [laughs] We could have fun with that.

Soaps.com: Just to clarify, the last episode we saw Danny in, he had left Phyllis’ trial with Nina. Is that the last time you’re seen?

Michael: Yes. It’s a bit awkward, I must say, but that’s the transition from the past writer, Maria Bell, to Josh Griffith. When you transition to a new writing team there are going to be some threads that need to be re-sewn. It is a bit odd of a transition, and I’ve had a lot of people asking questions. I’ve tried to be understanding as a writer and producer myself; I understand that these transitional things have to happen, but the fans don’t care about that – they want to know what is going on.

Soaps.com: I think viewers were expecting to see what would happen with Christine and Danny.

Michael: Yeah, in all fairness to the fans they have to fix that up a little. You can’t just have Danny walk off with Nina…I don’t even know where they left Cricket. Where is she?

Michael: Listen, that’s great. I’m happy to hear that. So, we’ll see what happens, but as of now, nothing exciting to report. We’ll let you know if something pops!

Check out the exclusive behind-the-scenes video clip from "A Princess For Christmas!" (US only) 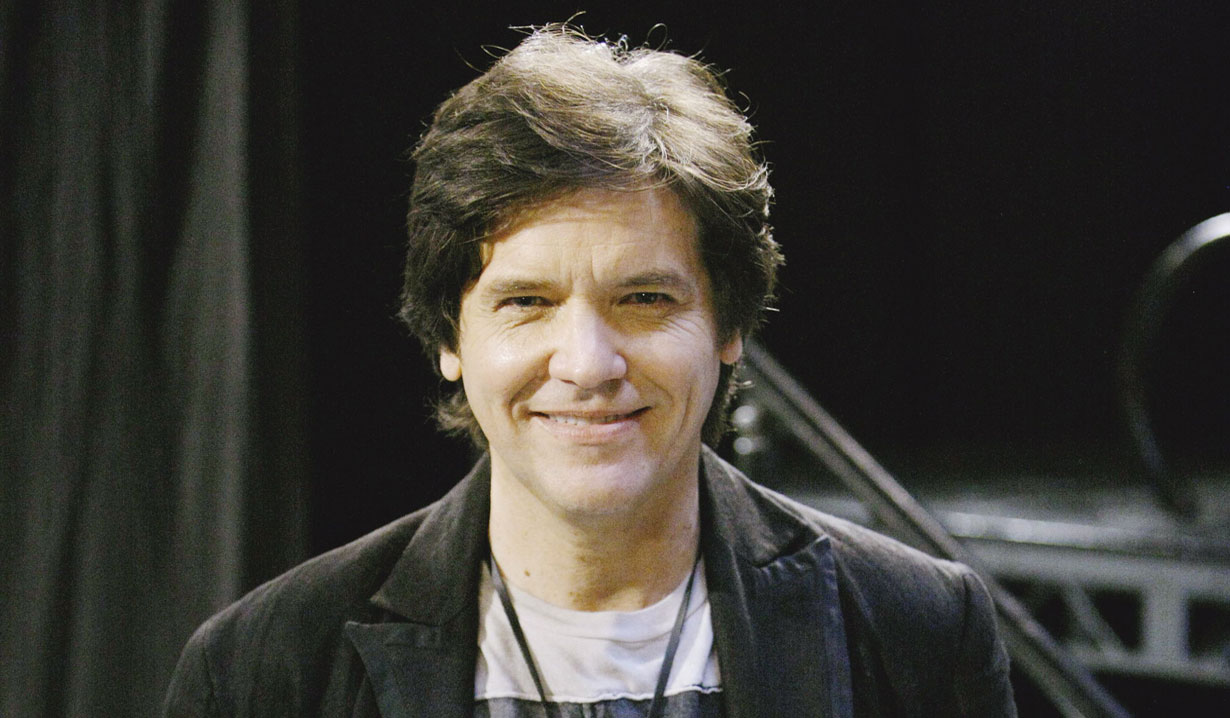 Soaps.com was thrilled to have the opportunity to chat with Michael Damian about his movie, “A Princess For Christmas,” which he directed and co-wrote with his wife, Janeen, now available on DVD. Don’t miss the exclusive ‘behind-the-scenes’ look at how the movie was made at the end of the interview. We also dished on his latest stint as Danny Romalotti on “Y&R.” Keep reading!

Soaps.com: “A Princess For Christmas” really draws the viewer in. It has the elements of a old-fashioned fable, while the background story and characters bring it into the present as a modern-day fairytale. How did you come to write this type of story?

Michael: Well, I think it was born out of our great love for holiday films, going back to “It’s a Wonderful Life,” “Christmas Vacation,” “Home Alone;” we love Christmas holiday films. We spent a lot of time in Europe – we lived in Europe, actually, for three years – and had the chance to live in a castle, and we thought maybe we should someday do a holiday Christmas film that revolves around a family from the U.S. coming to Europe. Then we came up with our fictional little sovereign nation, like Monte Carlo, but we called it Castlebury; you can have a little more fun with the royal lineage without offending anyone in the UK [laughs], and we got royalty in the movie – Sir Roger Moore – so that was a fantastic plus! We’re also big on family – I come from a large family – and Christmas is so important to us. We come together, have Christmas parties, we decorate; it’s definitely my most favorite time of the year.

Soaps.com: The movie captures that heartwarming feeling very well too.

Michael: Thank you so much. We were lucky to find a castle in Romania too. It was so beautiful, and so picturesque, and that was real snow falling. It was so cool! We had snow machines for back-up but they only came out once when it heated up one day, but that was not at the castle. So it’s all pillowy, gorgeous snow falling. Not easy to work in, but beautiful on camera.

Soaps.com: The pacing of the story was just right – you never got bored or felt things were happening too quickly or too slowly. How did you achieve that?

Michael: Once you create your story and you set up your characters…this is a family/romantic comedy film all in one…so we wanted to keep it moving, we wanted to get you on this journey as soon as possible and let it unfold in Castlebury. You set up your characters and let the audience find out who these people are, and who Jules is, and her situation, but not make it a long drawn-out set-up because the story really does take off once they get to Castlebury where you meet the grandfather, played by Sir Roger Moore, and this castle filled with these kind of odd people, which is fun. They’re stiff and they’re formal, and I think it’s also the story of how this American family from Buffalo changes [them] and brings a lot of life, warmth, and joy into this staunch castle.

Soaps.com: The casting was spot on. Katie McGrath was terrific as Jules.

Michael: Isn’t she amazing? So beautiful. She plays the evil queen in “Merlin.” Katie McGrath is a wonderful actress, we really got lucky with her. We found her in the UK – most of the actors actually came from the UK, which was pretty amazing.

Soaps.com: Did you and Janeen have a hand in the casting as well?

Michael: Absolutely. I directed, and when you direct you’re involved in all of that…and producing. We do casting sessions together; Janeen and I go through everything, we’re very close to the project and care about every aspect of the film. She’s a wonderful writing partner, a wonderful producing partner, and has tremendous attention to detail. It’s a thrill working with her.

Soaps.com: The DVD of “A Princess For Christmas” is available Tuesday October 16?

Michael: Yes! I’m very excited. It’s on DVD and Blu-Ray. I’m really anxious for people to get a chance to see it in hi-def, and the Blu-Ray should look amazing. You can get it at all your favorite retailers [in store or online]; pretty much anywhere you like to get your DVDs.

Soaps.com: Is there a ‘Part II’ in the works?

Michael: Actually, there is. We have a really interesting story and we’re working on it now. We were there, and Katie and everyone is asking us, ‘What are we going to do for the sequel to it?’ We came up with something funny and wrote it down and tucked it away in the back of our minds.

Michael: Oh, absolutely. There’s just so much more we can do. I always think optimistically and I hope we do make “A Princess For Christmas 2,” that would be great.

The Young And The Restless Spoiler Video: Jack's Shocker