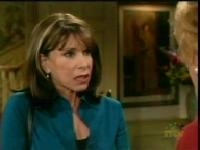 Hey Soaps.com readers! Last week I had the pleasure of chatting with Kate Linder who plays Esther Valentine on The Young and the Restless! She was personable and witty and just a lot of fun to talk to – here is what she had to say about her alter-ego, Esther!

Soaps.com: Of course everyone was so excited to see Esther, such a fan favorite, become part of the current front burner Chloe and Cane storyline. Do you anticipate Esther getting more airtime, or will it remain about the same?

Kate: I’m hoping to get more airtime! (laughs) There’s a lot coming up! I was totally shocked, it totally blind-sided me that Chloe is my daughter – I’m thrilled! Elizabeth is a phenomenal actress, and they say we look alike! It’s interesting though, here’s the fact that it’s my daughter, and she hates me – she’s embarrassed by her mother, by Esther! But, I’m so happy about the story line and it feels to me like the old Young and the Restless – the core is there – and I really appreciate that. I know that this is the kind of story that Bill (Bell) would have loved – that he would have written!

Soaps.com: Esther fans want to know all about the maid uniform! They wonder what your perspective is on Esther’s position in life and of Chloe being ashamed of her mother.

Kate: You know, Esther’s hurt, extremely hurt that her daughter is embarrassed of her and isn’t’ more appreciative of what Esther has sacrificed for her, so she could have a good life. Mrs. Chancellor sending her away to school so Kate could have a good life. Esther feels totally indebted to Mrs. Chancellor because when Esther had little Kate, Mrs. C let Kate live in the house, and she’s her Godmother. Esther doesn’t’ see her own life as bad, she feels that not only does she owe this to Mrs. Chancellor, to be there and work for her and take care of things, but she’s grateful to Mrs. C and wants to be there – it’s not like Esther wants to be somewhere else. She’s totally happy with what her station in life is, but she also wants her child to do better than she does. That scene where Esther went into the coffeehouse in the maid uniform – well, Mrs. Chancellor told Esther that she needed to go figure all this out with Kate, so she should go see her right now, and Esther didn’t even think about it! Her main objective was to get to her daughter. She wears the maid uniform, so she’s not embarrassed of it, so when she went there and Kate totally came unglued, it was a bit of a slap in the face! It’s a great story – Maria Bell is absolutely phenomenal, all the writers, I can’t say enough about everybody who is making this story happen. I loved the huge reveal – no one knew about Kate being Esther’s daughter! I can’t wait to see where this all goes – and no matter what happens, Esther and Jill are tied in to each other!

Soaps.com: What is happening with Katherine and her mental confusion?

Kate: There’s going to be a whole big thing coming about that. I’m not sure what’s happening with that yet, but Esther is concerned about Mrs. Chancellor. We all get confused and forget things – especially if we’re under stress! So, it will be interesting to see where they’re going with this, but Esther will be there to take care of her – Esther always tries to protect Mrs. Chancellor – even from Jill!

Soaps.com: What’s the deal with Esther being back in uniform?

Kate: When Maria Arena Bell became head writer, Esther went back to wearing the uniform, they had had her out of if for awhile, but Esther is so identifiable with the uniform. Although, sometimes, when she goes out of the house, she’s not in her uniform. I think it’s good at the house, though, for her to be in it, because that history’s there, and now, of course, you’ve got Kate (Chloe) back and hating the fact that Esther’s a maid – so that really works. It’s really a part of the character – when I put that on I totally go into Esther mode!(laughs)

Soaps.com: Who, in your opinion, would be a great love interest for Esther?

Kate: Oh boy, she definitely needs a love interest! She never gets it right. (Candace says she’d like to see her in scenes with Ted Shackleford, Jeffrey Bardwell) Oh, that’d be good! (laughs) That would be interesting because they’ve been in scenes together before! Esther would definitely love to have that, of course, a love interest.

Soaps.com: You mentioned that you have enjoyed working with Elizabeth (Hendrickson, Chloe/Kate). Which actors from other storylines would you find it interesting to work with?

Kate: I’d love to have more scenes with Judith Chapman – we have worked together before – and I really like the two characters together!

Soaps.com: Esther often brings a unique comedic touch to the show. Do you consider yourself to be a comedienne? Have you participated in other acting projects where you have showcased that aspect of your talents?

Kate: I definitely love that, and comedy is really hard to play – you have to play it for real, because if you play it for the comic aspect of it, it does not work. You have to play it as it’s really happening, and I enjoy that, I enjoy the comedic presence of Esther. It’s interesting because at the very beginning when I first started, over 26 years ago, there wasn’t any comedy on the show. Bill Bell was a genius because he realized that if Esther was too ‘over the top’ it wouldn’t work, and he was so great – he let me ride that line. You have to have humor! It’s great to provide that – it’s real life! That’s what I like about Young and the Restless, and why I feel that it’s the #1 show, because we play it like it’s real! Fans can communicate with the show and let them know if they like this sort of thing too – because they really do read their correspondence and listen to what the fans say.

Soaps.com readers – there’s more! I also spoke to Kate about herself – she’s an incredibly interesting person! To read this portion of the interview, visit our sister site, SOF!

You can also check out the footage of Kate receiving her Star on the Hollywood Walk of Fame here!!

The Young and the Restless Weekly...